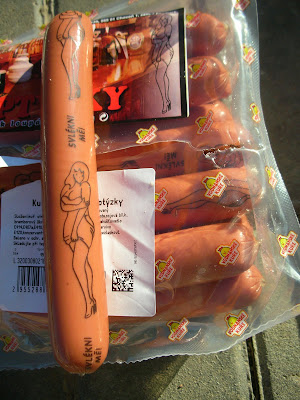 We had a barbecue recently, and I couldn't resist buying this package of chicken hot dogs for the grill.

And yes, each hot dog is encased in a plastic, uh, condom.

On each condom is a drawing of a rather voluptuous woman. The woman in question has one arm wrapped around herself demurely, while the other appears to be slowly pulling her dress up.

Next to the woman, it says, in Czech, "Svlekni me." That translates to, "Undress me."

Which means you've got to peel off the plastic casing before cooking or eating.

First of all, what's with the plastic casings? In the United States, I don't believe I've ever had to peel casings off any hot dogs I've grilled.

Secondly, why don't Czech hot dogs withstand the barbecue? Most every hot dog I've ever tried here basically explodes over an open fire. I've tried every trick to prevent it, but most of them end up looking like the unfortunate victims of a sixth-grade biology class learning about dissection.

Although I must admit that the Striptyzky are the best hot dogs I've yet found here. They didn't explode, and they tasted pretty good.

And there's a half-naked lady on each one. 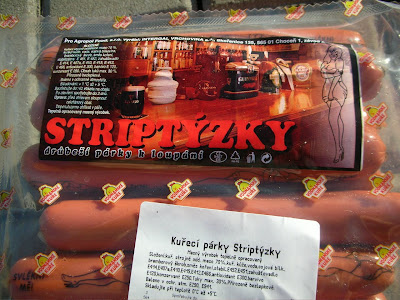 Interestingly, the label features a pub with a few pints of Guinness featured prominently.
Posted by Grant Podelco at 4:24 PM