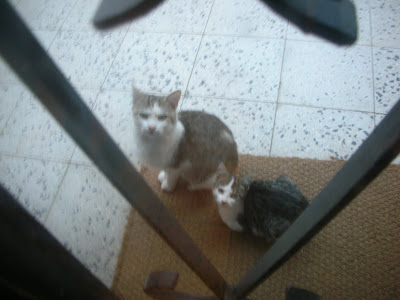 We lost a little friend of ours yesterday.

One of the things about living in the country as we have for the past year is that you encounter a lot more wildlife than you do in the city -- everything from spiders and snakes to hedgehogs, pheasants, martens, and, of course, cats.

We have two indoor cats, and last year we "adopted" a stray cat in the neighborhood. Emma named him Oscar. He's white and black and a little gray. He wanders away for most of the day, only to reappear at breakfast and dinner. Or sometimes he just snoozes the day away under one of the shrubs or pine trees in our front yard.

Oscar lets us pet him, but he won't let us pick him up.

He's a sweet cat, and he's had a hard life. He appeared one day last winter with a severely injured paw. It was all bloody, and he was having trouble walking on it. We tried to lure him with food into a cat carrier so we could take him to the vet, but he'd have none of it.

We didn't know what to do. Sadly, the Czech Republic doesn't have any sort of animal rescue service. You're on your own in this type of situation.

Eventually, Oscar's paw began to heal, and he began putting more and more weight on it. As far as we could tell, it never got infected.

Then, a month or two ago, we noticed that Oscar had a large swelling on the right side of his face and neck. We couldn't tell what it was. It didn't seem tender to the touch. He'd let us pet him there on his face with no discomfort.

Then, one morning, he appeared for breakfast with that side of his face all bloody and oozing.

Whatever it was that was causing the swelling had basically burst open. His skin was raw and the hair was gone.

Again, we made some telephone calls in an effort to see if we couldn't get some professional help, but were told there was nothing that could be done, unless we could capture him. We tried again, and failed again.

The bleeding seemed to stop, though, and even though Oscar couldn't really clean the wound, it appeared to get better day by day.

Now, the hair is growing back and he seems just fine.

A month or two ago, Oscar began to appear for meals in the company of a friend -- a kitten who looked just like him. We called him Oscar Jr. The tip of his nose was black, like he'd scuffed it somewhere and it was still healing.

Oscar and Oscar Jr. would scamper and wrestle in our front yard like old pals, and nestle close to one another on our stoop after they'd eaten. We even saw Oscar Jr. trying to nurse Oscar.

We figured that perhaps they were father and son, but couldn't be sure.

Oscar Jr. was a lot more skittish than Oscar, and would watch from the safety of a bush or clump of grass as we put out the food. When we'd close the door, he'd run and join Oscar at the bowl. Eventually, he would hang around nearer the bowl as we put the food out, just out of reach. He was getting used to us.

Maybe Oscar told him we were all right.

We felt we had four cats now -- two indoor and two outdoor.

We'd sometimes see Oscar Jr. peeking through the glass of our back door as we sat watching television. One night, one of our indoor cats, Chicho, started going crazy. Turns out, he had seen Oscar Jr., who was sitting in an empty flowerpot, looking in at us through the window, cute as could be. 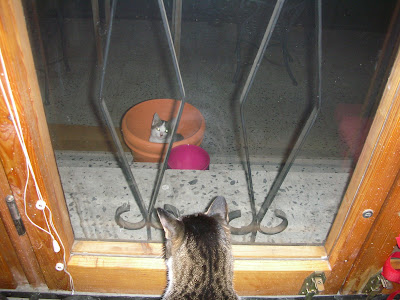 Oscar Jr. in the flowerpot, as Chicho looks on.

This past Sunday morning, Oscar Jr. didn't show up for breakfast, which was unusual, but not unprecedented. Both of them sometimes missed a meal, or showed up a few hours later than usual.

Daisy and I were both working on Sunday, but she had to be at work earlier than I. She left the house, and not five minutes later called me from her car. She'd passed a dead cat in the middle of the busy road below our house in Cerny Vul. She'd stopped the car and checked.

She was pretty sure it was Oscar Jr. It was the black scuff on the nose that did it.

She was upset. I felt sick to my stomach. 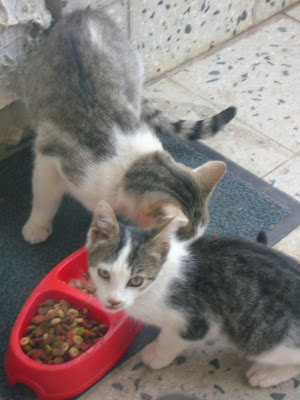 Oscar Jr. had a little black scuff on his nose.

I told her I'd check it out for sure. I threw on some clothes, found a pair of gloves, and headed out our back gate. The road runs close by.

I walked up to the road and saw him sprawled in the middle of a lane. Death had come swiftly.

Dodging cars, I dashed out into the road, gently picked up the body and carried it back home. I found a pickax and dug a grave in our backyard, and I buried him.

For a while, I convinced myself that this dead cat was too big to be Oscar Jr., and that we'd find him waiting for dinner that night. But he hasn't come back. And I don't think he's going to. 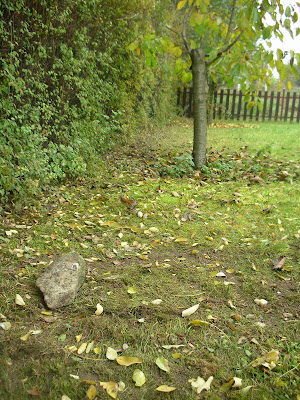 It's funny how little things like this can affect you so powerfully.

I barely knew this animal. In fact, until I picked him up, broken, from the asphalt, I'd never even touched Oscar Jr. before. But I felt I'd gotten to know this cat just a little bit in the past few weeks. We'd fed him and set a bowl of water out for him, and I invariably looked out for him and Oscar every time I passed the windows in our front door.

He was a sweet cat. I could tell that.

I'm amazed by how such events in our lives can happen so suddenly. One minute, I was lounging around in my pajamas on a Sunday morning, drinking a cup of coffee. The next minute, I was carrying the battered body of a kitten we once knew and digging his grave in our backyard, sweat pouring down my face.

Oscar Jr.'s death has made me ridiculously, inexplicably sad. I can't explain it. Pretty silly, I know.

Only I can't make this feeling go away.