The Best Steak In Prague 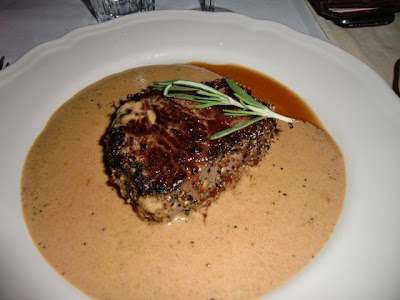 This is it (pommes frites not shown).

If you're a steak lover -- an aficionado of thick, tender, juicy cuts of beef -- the best steak in Prague isn't to be found in Prague.

You must drive a measly 18 kilometers from Prague 6 to the village of Okoř -- 22 minutes away, according to Google Maps -- and sit yourself down at a table at the Family Hotel Okoř & Restaurant, a clunky name for a truly charming establishment that'll make you believe you're sitting at an inn in the French countryside. (If that wasn't enough, it's even a stone's throw from the picturesque ruins of a 14th-century castle.)

Order the beefsteak filet with green pepper sauce and French fries. Medium rare. It'll set you back a reasonable $14, and comes with some of the best French fries around, to boot. 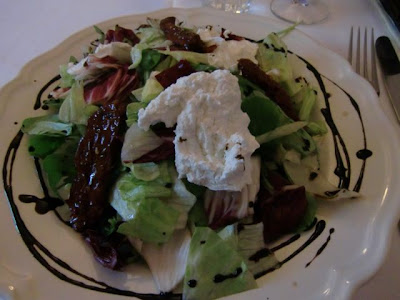 I started with this lovely salad of goat cheese and sun-dried tomatoes.

Then ask for a bottle of 2007 Bremerton Selkirk Shiraz from South Australia (around $25), a luscious, peppery red full of dark fruits that'll knock your socks off (at least it did mine) and which goes wonderfully with the steak.

For dessert, try the baked pear with a peppercorn crust and caramel ice cream. Also goes good with another bottle of that Shiraz. 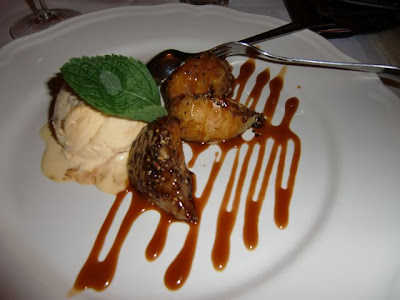 Baked pear with a peppercorn crust and caramel ice cream.

The hotel, I am told, uses a local butcher for all their cuts of meat. It's Czech beef, not Argentinian or American, but don't let that deter you. It's quality stuff.

I've never had a bad steak there. Ever.

In fact, I'm hesitant to even talk about the Family Hotel Okoř & Restaurant -- the friendly service, the reasonable prices -- for the usual reason in these situations: I don't want my favorite eatery, unknown to most people, to become a hot spot. But considering its location, I'm betting that is an unlikely scenario.

You can drive, if you don't want to drink, or hop in a taxi, or take the 350 regional bus from Dejvická for a 44-minute ride.

If you're lucky, you'll run into Czech composer and singer Petr Hapka having a meal. He lives in the village. It's rare when we don't see him.

Sure, there's more on the menu in Okoř than steak. (The menu on the website needs to be updated and doesn't reflect the current offerings, however.) But I always seem to order one thing when I go there.

Why mess with success? 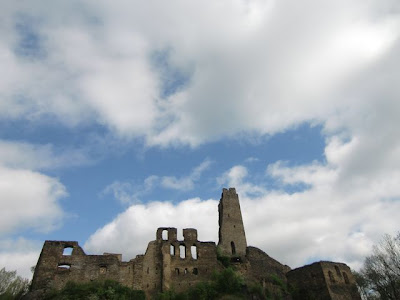 The castle ruins in Okoř.