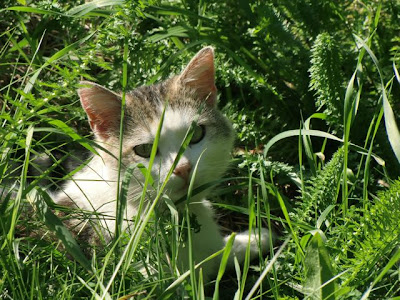 Oscar basking in the warm grass.

Every time I bend down to give old Oscar a scratch behind the ears, I think I ought to give regular Gusto readers an update on all the cats that I've written about over the past couple of years.

You may remember that Oscar is the stray cat that adopted us shortly after we moved into our house out here in Černý Vůl, northwest of Prague. He's been through a lot, that Oscar -- most notably an almost fatal brush with pneumonia last winter. He was so sick that he allowed us to take him to the vet. He lived in our bathroom/toilet for a month while he took his medicine.

He recovered, and while we would have liked for him to have stayed inside permanently, he is a wild one, and he wanted back out, where he's lived ever since.

He survived the harsh winter of 2009-10 and, except for the occasional cough and myriad ticks (which he patiently lets Daisy remove), seems to be in excellent health and spirits. Oscar likes to lounge in the sun on the covering to our woodpile.

Oscar can be found reliably on our doorstep every morning and every evening, waiting for his wet and dry food, and found sunning himself in various favorite locations around our garden during the day.

He's a tough old cat, but affectionate and loyal.

Most of the time, when we arrive home from work, he scampers in front of us on the sidewalk to our front door and plops himself down and rolls over on his back, hoping for a belly scratch. Of course, most of the time we're happy to. When we're through, we'll walk forward, and he'll jump up and scamper ahead and do the same thing all over again. 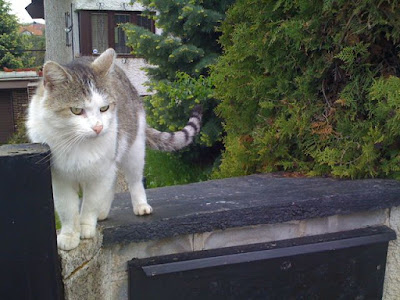 Oscar is always waiting to greet us when we come home from work. Doesn't it look like he's wearing eyeliner?

We really love Oscar and always get a little worried if he doesn't show up right on time to get fed. As they say, we are his hoomans.

Remember Flake? She's the newborn kitten we found in our backyard just an hour or so before we were supposed to catch a plane for Croatia in 2008.

Our landlord was kind enough to take care of Flake, as he named her, for the two weeks we were gone. He and his wife nursed Flake back to health by feeding her milk through an eye-dropper, before passing her along to us once we returned from holiday. 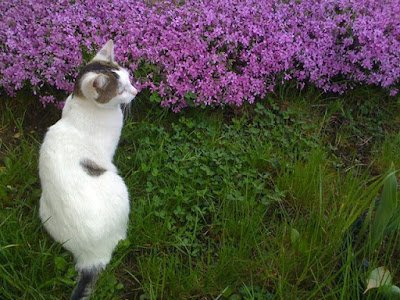 The very lucky, and lovely, Flakey, a few weeks ago at Stewart's house.

As you may remember, my good friend Stewart and his family adopted Flake a month or so later, once she was eating solid food and on the road to recovery.

I’m happy to report that Flake (or Flakey, as she's now known) is doing great in Roztoky, except for a recurring eye infection of some sort. When we found Flake, her eyes were still closed, and I’m afraid we may have actually caused the infection in our efforts to care for her and clean her off.

Flakey was shortly joined in Stewart's household by Flukey, yet another (albeit older) kitten that showed up on our doorstep around the same time. Stewart's kids wanted a second cat, and Flukey fit the bill nicely.

Both are doing well. 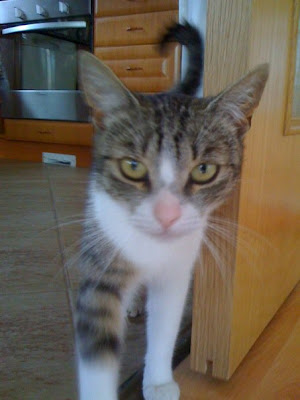 A recent picture of Flukey. Says Stewart: "She's a lovely cat, my wee pal. She's also a bit nuts....had a bit of a tough start in life so I think she appreciates a happy homestead. She gets so relaxed she forgets herself and repeatedly falls off couches, beds etc. Very funny."

And then there's Luna.

Luna, as Emma named her, was a gorgeous 8-week-old kitten who showed up on our doorstep last fall. After a few weeks of living inside with us, Luna was adopted by another friend of ours, Venera, where she's been thriving ever since. 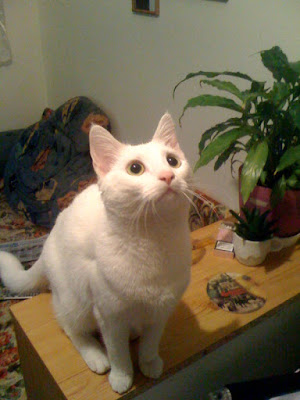 Luna in her new home recently.

There are few other cats we've seen eating recently from Oscar's food bowl -- Ghost Cat, Black Kitty, and Orange Cat -- but all seem either to be too skittish or too thuggish to be candidates for adoption.

I'm so glad we found good homes for all these stray kitties, but I'm also glad we haven't had to perform that task again for quite some time.

Perhaps getting Oscar fixed while he was at the vet did the trick! 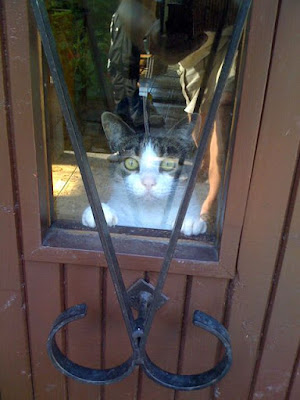 Our housecat Chicho, gazingly longingly out our front door, no doubt at Oscar frolicking about. We lost our other housecat, the beloved Zhenya, at the end of December. 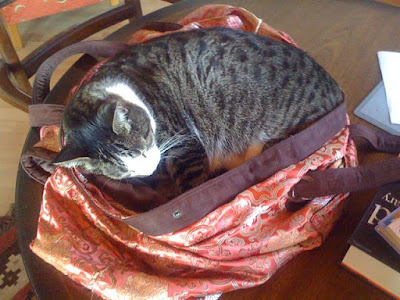 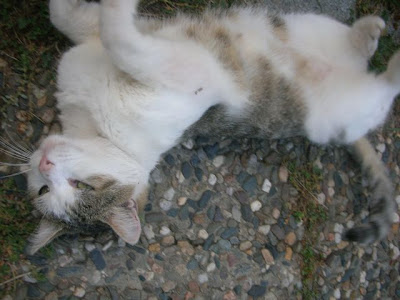 Oscar likes nothing better than to roll over as we're trying to pass by on the sidewalk and beg for a scratch.
Posted by Grant Podelco at 9:30 PM