We Came, We Saw Kasabian 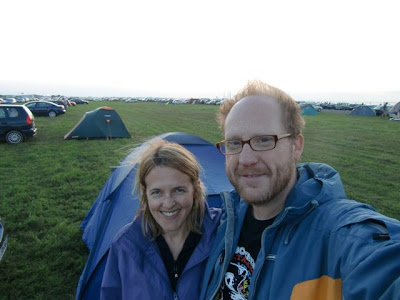 Tent pitched and ready to rock.

Daisy and I pretended we were young people last weekend.

We attended the Open Air Music Festival in the village of Panenský Týnec, a village 50 kilometers northwest of Prague. The festival was held on the runway of the airport in the village. I thought it was some sort of abandoned Soviet military airport, but now I understand it may still be in use.

Anyway, we were there to see one band and one band only -- Kasabian, the headliner for Saturday night.

A lot of people in Europe still haven't heard of Kasabian, and no one in America seems to have, but they're huge in the U.K. Their latest album, "West Ryder Pauper Lunatic Asylum," was shortlisted for the 2009 Mercury Prize, spent two weeks at No. 1, and was voted best album of 2009 by Q magazine. Kasabian also won best group at the 2010 Brit Awards.

Neither Daisy nor I had ever attended an outdoor music festival. Even though plenty of bands that we liked have played these festivals in past years, we just didn't want to deal with the mud and the weather and the drunk people and standing in the middle of a pack of 10,000 people all squeezed against the stage.

But for Kasabian, we'd endure. 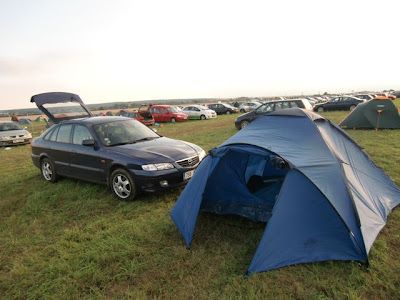 We even decided to camp at the site and really dive into the whole festival culture. OK, we did pay a bit extra for "VIP" tickets that allowed us to park and camp in a more secure area (and gave us access to a plush VIP tent with a cocktail bar, comfy couches and private toilets) , but still. 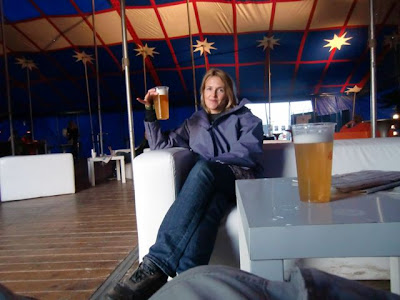 Enjoying an adult beverage in the VIP tent.

The VIP tent came in handy, because Kasabian didn't come on until close to midnight. But they were worth the wait. Fantastic show. It's great when you know every single song, and you love every single song.

We (ok, Daisy) had only one complaint: too much swearing, sonny. 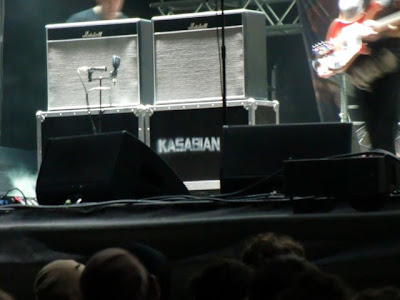 My arty shot before the show began. 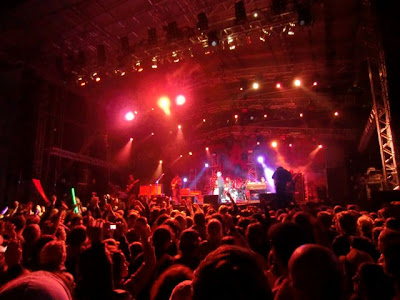 We were actually much closer than this picture would suggest.

Kasabian is a sophisticated and lyrically complicated band. But when it came to communicating with the crowd, the lead singer, Tom Meighan, fell back on motherf***er about 600 times too often. Does he think that's the only English that Czech festival-goers understand? Or did he really, truly think we were motherf***kers? Surely there are better exhortations.

Also, they shouldn't have made us do the wave.

But it was a small chink in what was otherwise a motherf***ing good show. 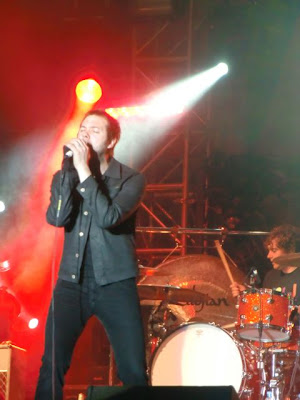 "You motherf***ers out there might know this next one!"

We got back to our tent around 2 a.m. and zonked out, but I noticed that the music didn't actually stop until around 6 a.m.

We had a great time. The food was tasty (we enjoyed some delectable Prague ham roasted over an open fire), the weather held, and the music fans behaved themselves (neither of us noticed a single police officer the entire time we were there).

Now, if we can only remember how to set up the tent the next time. 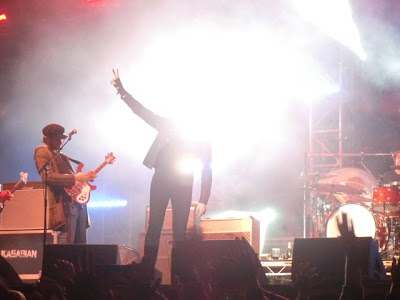 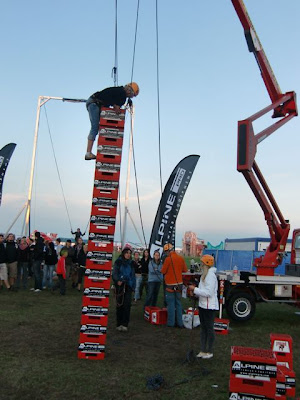 One of the sideshow attractions was this climbing demonstration. This woman was climbing a stack of empty beer crates. One of her partners would winch another crate up to her as soon as she'd scaled the last one. Pretty impressive. 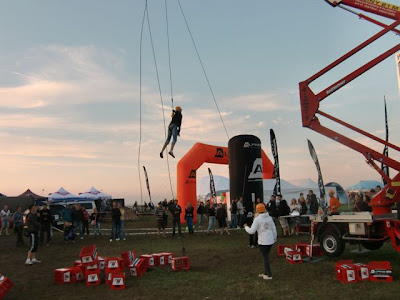 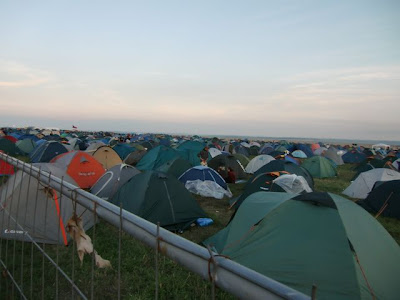 This is the camping area for the riff-raff. Reminded us of a refugee camp.
Posted by Grant Podelco at 9:10 PM