A Glass Of Headache 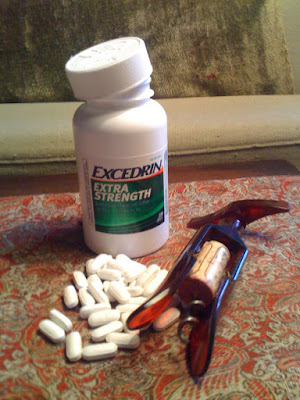 I just learned about something called Red Wine Headache. It even has its own acronym, RWH.

Of course, I knew that it's possible to get a headache after drinking red wine. But I figured that that was also called a hangover. Maybe I'm the last wine drinker in the world to learn that you can get a RWH without really drinking all that much.

One of my favorite wines is Tarapaca Cabernet Sauvignon. It's a $15 bottle of wine that is often on sale in Prague for $5, so I buy -- and drink -- quite a bit of it. I have a friend who drinks a lot of wine but who says he can't drink Tarapaca without getting a headache.

I guess I kinda discounted his headaches as being, well, all in his head (at least as far as being caused by the Tarapaca, that is).

I woke up with a smashing headache, a real stomach turner. I felt nauseous. I took a handful of pain killers, but it's still never quite gone away, nine hours later.

Last night, I drank a bottle of Aromo Private Reserve Carmenere 2007. I really nice bottle of wine from Chile. What I woke up with was not a hangover, however. It was a RWH. I'm sure of it now.

Turns out RWH even has its own Wikipedia page.

They're not sure what causes it (sulfites, histamines, tannins), only that it is a legitimate phenomenon. And each person is affected differently by different wines. A wine that I love gives my friend a headache, for example.

There's no cure, other than staying away from red wines that give you a heachache.

It was delicious, but I guess I won't be having a glass of Aroma Private Reserve Carmenere 2007 anytime soon. Thankfully, I only bought one bottle.
Posted by Grant Podelco at 5:47 PM