'A Wee Tingling In My Heart' -- A Quick Trip To Dublin 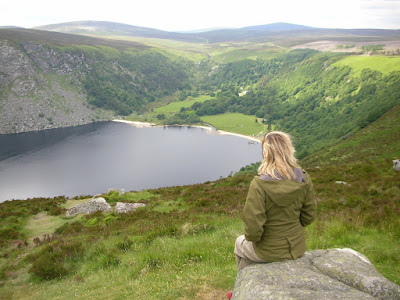 Daisy looks out over Loch Tay, in the Wicklow Mountains. It's known as Guinness Lake for obvious reasons. And the bordering estate is apparently owned by the Guinness family.

“I've always liked it here. Part of me is Irish. ... My family comes from the west coast, so whenever I come to Ireland I get a wee tingling in my heart that I'm where I belong.” -- Billy Connolly, Scottish actor

Everything you read in the following post is unashamedly biased. The views expressed herein are not objective.

But it's all true, I assure you.

Daisy and I just returned from a long weekend in Ireland. I love Ireland. I'm one-quarter Irish, and the land and its people -- its wonderful people -- well ... they speak to me.

It's a damn cliche, but it's true. 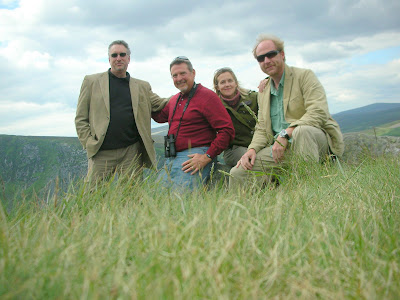 Mike (left), Paul, Daisy and I in the Wicklow Mountains.

Daisy's father, Dr. Paul Sindelar, who's an associate dean in the College of Education at the University of Florida, was in Dublin to work with an associate of his, Dr. Michael Rosenburg, a professor in the special education department at Johns Hopkins University in Baltimore, who was in Dublin on a Fulbright scholarship at St. Patrick's College.

We decided to visit them both for a few days and hang out and see the city and the countryside and eat some fish and chips and Indian food and drink some Guinness.

OK, not some Guinness. A lot of Guinness.

We had a great time. (See the bottom of this post for a full slideshow.)

We booked a cheap flight from Prague to Dublin on Ryan Air for about 2,700 CZK each roundtrip, or around $175. Not bad. Unfortunately, hotels are another story. Turns out there was a massive outdoor Neil Diamond concert on the Saturday night we were there, and hotels rooms of the affordable variety were booked solid.

Not even my old friend priceline.com could come to the rescue. 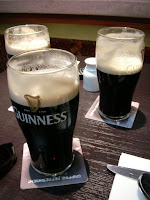 In the end, I found a room at the Schoolhouse Hotel, slightly off-center from central Dublin, but only about a 15-minute walk to Trinity College. Turns out, it was one of the nicest hotels in which we've stayed. An old 19th-century schoolhouse converted into a hip hotel. High recommended (but pricey at an average of 218 euros a night during our stay.)

What'd we do while we were in Dublin?

Well, we did the usual tourist stuff (saw the Book of Kells, toured Trinity College, paid a visit to Christ Church Cathedral, where Handel's "Messiah" was first performed, wandered around the Temple Bar district and downed a few pints, tried to take the Guinness brewery tour but were repelled by massive crowds), but there's no use in me writing about all the things you can find explained in any guidebook.

I'd like to try to offer some advice and insight that might be unique to "Gusto." Or at least some tips that Rick Steves hasn't already written about. 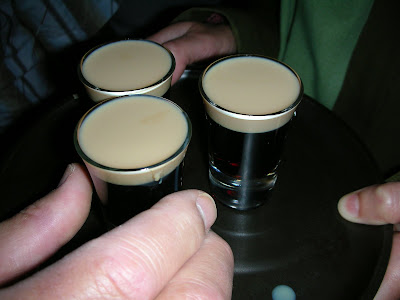 I am confident in my masculinity, so I can admit that I drank something called a Baby Guinness -- Tia Maria and Bailey's. Pretty tasty.

We drank a lot of Guinness while we were in Dublin, including a pint at 6:45 a.m. in the airport as we waited for our return flight. 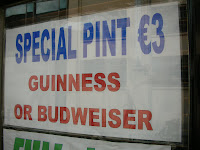 I couldn't wait to taste my first pint. It had been too long. But at an average of 5 euros a pint ($7.87), it's quite a shock to the wallet after the $2 half-liters of fantastic Czech pilsener.

Mike to the rescue.

He came across a cool dive -- the Palace Guest House and accompanying Restaurant Royale at 15 Upper Stephens Street, not far from Temple Bar -- that sells pints of Guinness for 3 euros each. Now that's a bargain.

(You can also enjoy a pint of Budweiser for the same price. Guinness or Budweiser? Hmmmm. How many people actually choose Budweiser?) 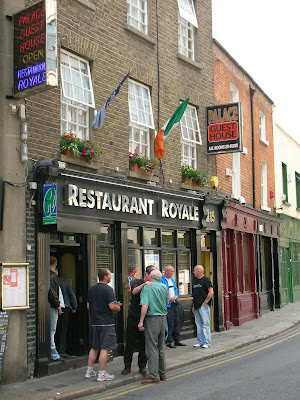 The staff was friendly, if a bit bruised and bleary, and you can also get a decent greasy breakfast for around 5 euros.

If you're going to go see the incredible 9th-century illustrated manuscript known as the Book of Kells at Trinity College (and I recommend that you do so), you'll pay 8 euros admission. For 2 euros more, you can enjoy a guided walking tour of Trinity College led by charming, witty and smart Trinity students.

And the 10 euros includes admission to see the Book of Kells and the amazing Old Library at Trinity College. 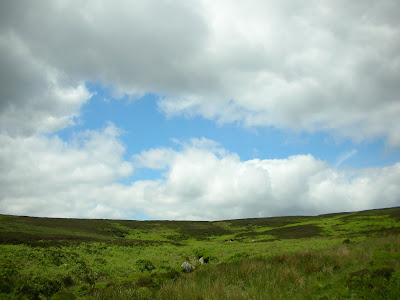 Somewhere in the Wicklow Mountains.

The guide we ended up with (I wish I'd gotten his name, or at least his picture) kept us smiling the whole time, serving his college history with a liberal dose of disparaging remarks about some of the newer architecture on campus; the etiquette at the dining hall, and why there was a woman's high-heeled shoe lodged in a branch of one of the gigantic Oregon big-leaf maple trees in the commons.

I don't normally take tours, but I'm very glad I took this one. A hoot.

We rented a car for a few days and headed south of Dublin, up into the beautiful Wicklow Mountains. While driving through the tiny village of Glencree, we passed the easily missed Glencree Deutsche Kriegsgraberstatte, a cemetery for German airmen and sailors from both world wars who either crashed on Irish soil or washed ashore. (Ireland was neutral in World War II.) 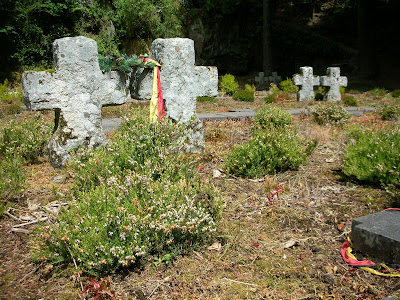 The German cemetery in Glencree.

Almost 50 of the 134 graves in the tiny cemetery are of civilian German detainees who were being ferried from England to Canada for internment when their ship was hit by a torpedo fired by a German U-boat near the Irish coast.

It's a lovely little spot, and quite moving, in its quiet way. It's easily missed, so keep an eye out if you're in the area. It's worth a stop. 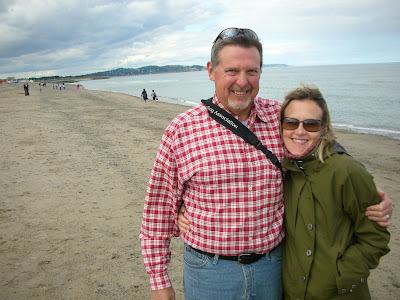 Daisy and her father, Paul, on Father's Day on the beach in Bray (above) and on the top of Bray Head (below). 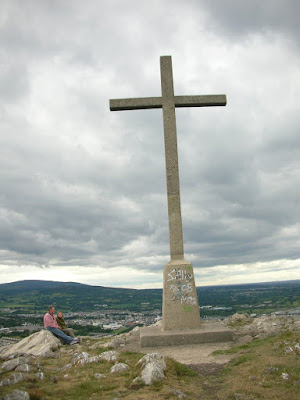 Some 20 kilometers south of Dublin, along the coast, is a faded, and still fading, resort town called Bray. It's easily accessible by train from Dublin, and it's worth a day trip, or even an overnight stop.

I don't know what it is about the place. It's picturesque, but it's not Nice. And it's more than a little frayed around the edges. But Daisy and I have been to Bray twice now, and enjoyed ourselves thoroughly each time.

There's good hiking along the clifftops to the neighboring village of Greystones, or to the top of Bray Head, which is what we did on this visit.

And there's a quirky old Victorian-era hotel that faces the sea called the Esplanade that we really like. Double rooms were around 79 euros a night.

Plus, Bray is the perfect base from which to explore the Wicklow Mountains, where
many scenes in movies such as "Braveheart" and "Excalibur" were filmed.

We enjoyed a fantastic Indian meal at Jaipur, at 41 South Great George's St., in central Dublin. Pricey (but what isn't in Dublin?), but worth it (main courses around 20 euros each).

Some of the beat Indian food I've ever had.

We also ate well at Unicorn, at 12b Merrion Row, near St. Stephen's Green, an Italian restaurant that's made something of a name for itself. Again, pricey (main courses around 30 euros each), but the food and the atmosphere worth it. It's got a nice buzz to it. You can tell people are having a good time, and eating good food.

There's energy in Dublin. Young people clog the streets, and they seem happy. There's a lot of laughter and good spirits. The restaurants and bars and shops are packed.

I can't wait to go back.

P.S. When looking for a nice quote about Ireland, I happened to come across the one by Scottish actor and comedian Billy Connolly that begins this post. Not only does he say what I, too, feel in my bones, but in an odd coincidence, we happened to run into Billy Connolly while we were doing a bit of shopping in Dublin. He was in town for a sold-out show at the Olympia Theatre. We happened to be watching a street performer when Connolly walked by, stopped, and threw some money into the hat, with a twinkle in his eye and a big smile. He seemed genuinely delighted by his brief encounter with one of those statue people covered in metallic paint, and then stayed to watch as a wee little girl came up to the performer, hypnotized. It was a nice little moment. 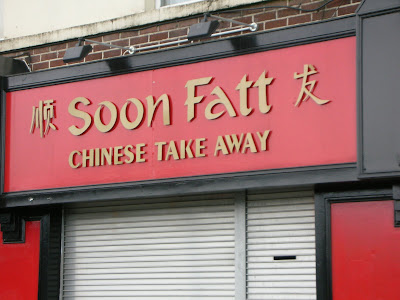 A funny name for a Chinese restaurant in Bray (above) and a shop in Dublin (below). 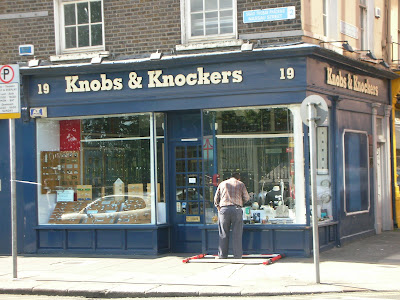 Funs Was Had By All 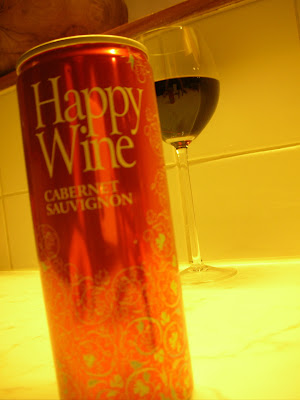 I just had to buy this wine-in-a-can the other day.

I'm not sure what was more interesting -- the name, or the fact that it was WINE IN A CAN!

It cost about 30 CZK, or around $2 for the can, which was basically one generous glass. It was of Italian origin.

And you know what? It wasn't bad! I've had much worse. I would have happily drank more, frankly, but you're definitely paying for convenience, considering I can buy an entire bottle of very drinkable wine in Prague for less than $5. 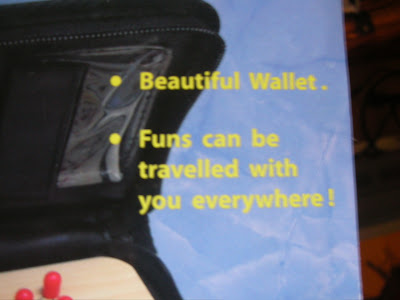 I got a kick out of this funny translation on a game of travel Chinese checkers I bought recently.

Sorry for the poor quality of the photo, but I think you get the idea.
Posted by Grant Podelco at 9:54 PM No comments: