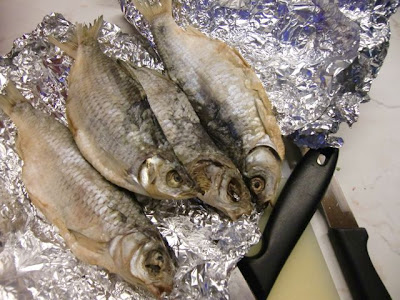 We had some lovely houseguests over the past four days -- Daisy's old friend from her days in Moscow, Ellen Barry (who's now one of the Moscow correspondents for "The New York Times") and her husband, Kiya Wilson, and their adorable 2-year-old daughter, Alice. (That's Daisy, left, and Ellen in the photo below.)

I'd never met any of them before Saturday, but now I feel as if we're all close friends. 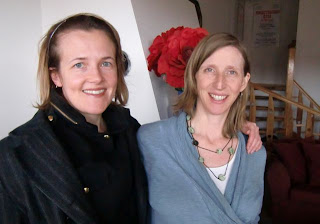 Among the gifts they brought us from Moscow were a bunch of ugly old dried fish with surprised looks frozen on their withered faces. They were wrapped up in aluminum foil and kitchen towels.

"Was it legal to fly these things across the border?" I asked.

Turns out they're called vobla, and they're a tradition in Russia, pulled apart for the scant salty flesh inside and washed down with copious quantities of beer.

As for my first taste of vobla, well, I'd describe it as salty fish chewing gum. Very salty. It burned all of our throats. Thus, the beer, I guess.

Turns out Daisy once wrote an homage to vobla when she was working for "The Moscow Times," that city's venerable English-language daily newspaper. (Even a little drawing that accompanied one of her columns, called "Love & Death," featured a vobla. See it below.)

It originally appeared on October 6, 1995. I thought you'd enjoy reading it.

No matter how culturally flexible we all become after a few million years here, there are still many things about Russian cuisine that aren't worth leaping up to defend. Salo is the obvious leader of the pack -- thick slabs of slippery pork fat are simply not an acquired taste. But there are other snack alternatives that unfairly bear the brand of the Russian Inedibles.

Yes, they may be strange looking, but some of them truly deserve admiration and even hearty consumption. So today we consider the humble vobla, the rather dour dried fish you see babushki waving around at metro stops all over town. It's vobla season, as a matter of fact, so what better time to trash your stuffy preconceptions and hunker down over a nice chewy strip of salted fish? 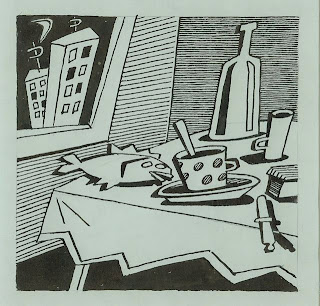 In some ways, vobla is at an immediate disadvantage where salo isn't. Salo, from a distance, could be a dab of whipped cream, or perhaps a nice slice of brie. It's only once you've tried it that you realize what a terrible thing it is. Vobla is so unmistakably an ugly dried fish that many people don't ever even get close. And that is a shame, because once you've gotten over the shock, it can become almost addictively delicious.

Delicious. Well, that's a strong word. Let's stick with addictive. It's not only that pungent, briny taste that keeps you coming back for more -- it's the whole vobla ritual, the cutting and peeling and searching for what ultimately turns out to be very few pieces of meat. It's a snack, like sunflower seeds and crayfish, that keeps hands occupied and mind pleasantly focused. Considerably more complex than ripping open a bag of potato chips, and not nearly as fattening, a single vobla can take nearly an hour to enjoy.

There are other advantages, as well. It's inexpensive, it travels lightly and requires no superfluous packaging, although sometimes a sheet of newspaper is appropriate. If you're an educated vobla consumer, you will be eating fish that is actually quite fresh. (Hold the fish up to the light to check for desirable translucence. Then squeeze gently -- if there's a little give, you've hit the jackpot.) It doesn't really smell and requires no special storage if you want to put off your vobla pleasure for another time. You can leave it on the windowsill, or throw it in the corner of your closet for all it matters, and it will still be there waiting for you, flat and stiff, at the end of the day. Or week.

Perhaps most amazing is that vobla has only one ideal accompanying beverage: Russian beer. Vobla is the one food on earth that makes watery Russian beer taste like nectar from the gods. No one is quite sure why. Eat vobla with a bubbly import and you won't be doing anyone a favor. But pour yourself a Zhigulyovskoye or a Kolos, crack open that fish and you'll swear you've never tasted anything better in your life.
Posted by Grant Podelco at 7:01 AM 4 comments: 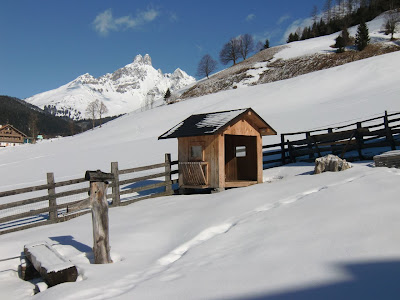 We just returned from a ski trip to the lovely village of Filzmoos, Austria, south of Salzburg. (We also went there last year, during an incredible four-day-long blizzard.)

Daisy and Emma drove there on February 21 with our good friends Tanya Kancheva and Momchil Blagoev and their son, Victor. (You may recall that Tanya and Momchil showed us around their native Bulgaria on a fantastic trip last April.) I joined them late on February 25 after returning from a trip to the United States for my father's funeral.

Unfortunately, my one day of skiing last Friday was rainy, but we went ahead and skied anyway.

We had amazing food and beer and schnapps, and great conversation.

Naturally, on February 27, the day we had to drive back to Prague, the weather was glorious. But those guys had great weather before I arrived, so all was well.

We stayed at the Rettenegghof in Filzmoos, perfectly situated right on a beginner's slope that was perfect for the kids (and for me, too, a beginning skier). The hotel is also a working farm, and we had homemade butter and fresh milk delivered to our door in the mornings.

Doesn't get much better than that! 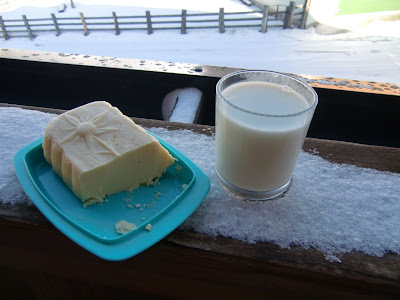 Homemade butter and fresh milk, right from the farm.
Posted by Grant Podelco at 11:47 AM 3 comments: