Just a quick note -- between blog posts -- to let everyone know that I am on Twitter, and tweeting away fairly regularly.

About travel and music and drink. About Prague. About biking. About life.

Also recording some AudioBoos, too.

Please check me out and follow me, if you're so inclined. It would be a pleasure to tweet in your general direction.

You can find me on Twitter at grantpodelco
Posted by Grant Podelco at 12:14 PM No comments: 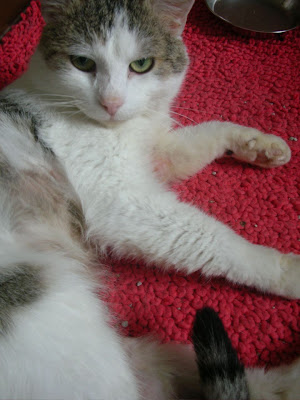 Oscar on his favorite carpet in our bathroom a few minutes before his release.

We really had no choice.

We released Oscar, the stray cat, back out into the wild just a few minutes ago.

We've been nursing him back to health over the past month or so, ever since we discovered him wheezing and coughing under a pine tree in our front yard. Turns out he had pneumonia.

We'd been feeding him for a year and a half or so, almost every morning and evening, when he'd arrive on our front stoop. I wrote about the drama in a previous post.

Well, after numerous trips to the vet, Oscar did recover, but we kept him safe and warm and dry in our bathroom while we figured out what to do with him. In the meantime, we got him fixed, and gave him medicine for worms and fleas, and fed and watered him well.

He got so used to our presence that he'd roll over and let us scratch his tummy. He'd make a special kind of squeak when we came in in the morning and at night to feed him. He'd purr like crazy and let us stroke him from his ears down to his tail.

And he, amazingly, used the litter box religiously.

But after a month in our bathroom, we had to finally figure out what to do with him.

We had three choices, none of which involved finding him an adopted home. It just wouldn't have worked. We're sure of it.

We recently went to Bulgaria for eight days, and left Oscar in the kind care of our friend Rob, someone very familiar with cats himself. Unfortunately, Oscar did not fare so well in Rob's care. Nothing to do with Rob. It was simply the stress of being in a strange environment.

He didn't eat all week, expept for a few nibbles at some sardines that Rob put out in a last-ditch effort. He hid behind the washing machine most of the day, only coming out at night to make running leaps at the windows in an effort to escape. The problem is, Rob lives on the 13th floor of a high-rise.

He lost a lot of weight during those eight days.

Daisy and I are both confident that Oscar wouldn't have done well at all in an adoptive home. In fact, he would have suffered. (We sent out word about Oscar through a variety of forums, but only gone one response from someone possibly willing to adopt him, which fizzled out in the end. Just as well, we think.)

So we had three options:

1. Let him live in our bathroom for the next few years.

2. Try to introduce him to our other two cats and let him live in our house.

3. Reintroduce him back into the wide world.

Option No. 1 was obviously out of the question.

Option No. 2 was enticing, and we had just taken our two housecats to the vet to begin the series of shots necessary for them to coexist around Oscar. But the series of shots would not be over for another four weeks, and we simply couldn't risk exposing them to potentially dangerous viruses that Oscar might be carrying.

Nor could be fathom keeping Oscar in our bathroom for another month until the shots took full effect. (Nor did we want to endure the experience of two male cats trying to mark their territory in our house, if you know what I mean.)

And frankly, based on a test run a few weeks ago, neither of us think that Oscar would have fared well confined in our house, even without the complication of the shots. In a brief test run, Oscar also made flying runs at our windows in an effort to escape.

So we were left with no choice, really, at least in our minds.

Oscar was now healthy. And it just didn't seem fair to keep him cooped up in our small bathroom any longer.

And it is almost summer, and the temperatures are moderate, and he should have no trouble staying healthy.

But it was a tough decision nonetheless. 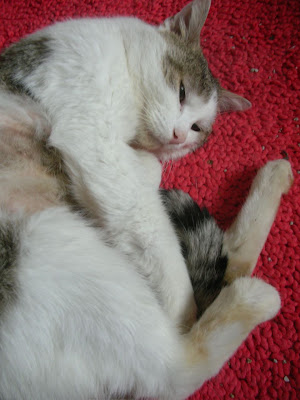 He liked to roll over and let me scratch his tummy. Pretty trusting for a stray cat.

A few hours ago, after he ate a big plate of cat food, we put him in his cat carrier, took him outside on our front steps, and opened the cage.

After a few seconds of hesitation, he ran out and disappeared into the bushes. (Of course, it started to rain a few minutes later. Damn.)

But it's all familiar territory to him. He's lived around our house for at least 18 months, and survived two winters. He knows where to go to stay warm and dry. And he definitely knows where to come for food.

I still have a lump in my throat after seeing him vanish into the hedge. And I don't think I'll feel any relief until he shows up for breakfast or dinner again and lets us scratch him behind the ears.

And I feel confident that if he gets sick or injured again, he'll let us capture him and take him to the doctor.

Godspeed, Oscar. Please be careful out there. You're a tough cat, and you've touched all of our hearts.
Posted by Grant Podelco at 8:27 PM 2 comments:

My friends Stewart Moore and Mark Baker and I hopped on our mountain bikes and headed toward the airport on Saturday.

U.S. President Barack Obama was due in Prague, and we wanted to see Air Force One land.

Sure enough, we managed to get a fantastic view of the big bird landing right over our heads.

I'll be writing more about the whole bike trip on Grant's Prague Bike Blog, but for now, enjoy this video.
Posted by Grant Podelco at 7:47 PM No comments: