Checkmate from Umer Durrani on Vimeo.

When I was a younger man, I used to dream of being a filmmaker and an actor. A good friend and I used to write, direct and star in some pretty awful amateur 8mm horror movies. (I wrote about them and posted them previously here.) I was also in my drama club in high school.

I even had a small speaking role in a low-budget drama that was filmed in Syracuse, New York, back in the late 1980s. (You can see a clip of that film, "Worst of Enemies," here.)

Living in Prague got me to thinking about getting back into the game, at least from an acting standpoint. Prague's illustrious Barrandov studios has long drawn big-budget films from all over the world ("Mission Impossible IV" being the latest Hollywood blockbuster filmed partially in Prague), and both the Film and Television Faculty of the Academy of Performing Arts (FAMU) and the Prague Film School (PFS) attract talented young actors and directors from all over the world. 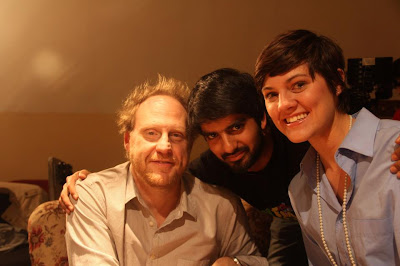 The director of "Checkmate," Umer Durrani, and the wonderful Sarah Brown, who plays my put-upon wife.

I was also inspired by the success of my good friend, Stewart Mooore, who threw himself into the acting game a few years back, with excellent results (including roles in "The Chronicles of Narnia: Prince Caspian" and "Solomon Kane.")

So, I mustered up my courage, registered with some casting agents here in Prague, and put my name, photo, and details into the database at the PFS.

I don't know if I'm any good, but I'm having a lot of fun. It's amazing how close you end up feeling to the cast and crew of each film, despite having spent only a couple of days together. But I guess they are days of intense emotion and hard work, so the bond develops.

So far, I've had roles in seven PFS films (one of which, "Dream House," directed by Eirini Karamanoli, has been officially selected for the 2012 Angeleno Film Festival in L.A.). I also nabbed a small speaking role as "Embassy Official" in one episode of the upcoming ABC-TV series "Missing," starring Ashley Judd, Sean Bean, and Keith Carradine. It debuts in the U.S. at 8 p.m. on March 15.

For some reason, I keep getting cast as either the abusive husband or cruel father, or, in my latest film, a cop who loses his cool. Weird.

Two scenes from "Dream House," in which the main character, played by Nicole Gay Grisco, is buying a house where each of the rooms reveals a snippet of a bleak future. Of course, I play an abusive husband. The film also stars the great Peter Hosking as the creepy real estate agent.

I will admit, it's hard to hold down a full-time job and fit in these acting gigs. I may be forced to take my name out of the PFS database and simply hope for a few more major jobs, like "Missing," to come along. If they ever do.

In the meantime, I'm eagerly awaiting the final cuts of three PFS films I've been working on. If I'm allowed, I'll post them here when I get copies. Many times, the students can't enter the films into festivals if they're available online somewhere already. 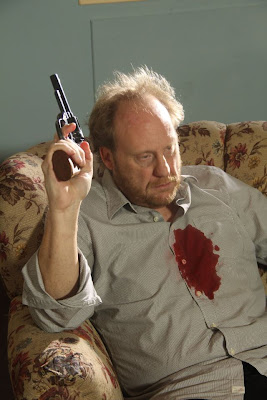 In the PFS film "Checkmate," I play a chess master who becomes obsessed with the game at the expense of his wife. In the end, he gets his comeuppance. Interestingly, that's a real gun, and we had to have a gun handler on set from Barrandov to supervise while we filmed.

I hope you enjoy the surreal "Monogamous Man" by Doron Tempert, in which I co-star with the incomparable David Worden. That film was supposed to be an entirely different script, and filmed outside, but since it was raining quite hard on the day of the shoot, Doron and his PFS pal Raam Reddy rewrote the script in one day and we filmed inside from about 6 p.m. until 2:30 a.m. 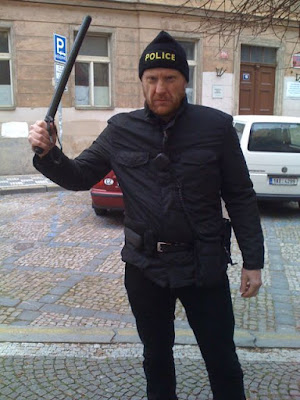 In the PFS film "Blue Lines," directed by Zach Nanus, I play an overly aggressive cop who is filmed abusing an Occupy Wall Street protester. 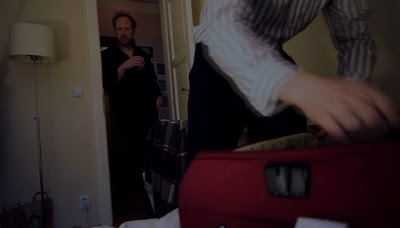 A scene from an as-yet-untitled PFS film directed by Sarthak Johar, in which I play a father who heaps abuse on his dying son in an effort to get him to come to grips with his life.
Posted by Grant Podelco at 9:19 AM No comments: