Prague is full of old signs in wonderfully weird fonts. Many of them date back to the communist days. Like this sign for a potraviny, or grocery store, in the Prague 6 neighborhood.

I'll try to keep my camera handy and record some other cool fonts I come across in my wanderings. They must be preserved.
Posted by Grant Podelco at 4:15 PM 2 comments:

Snapshots From An American Journey 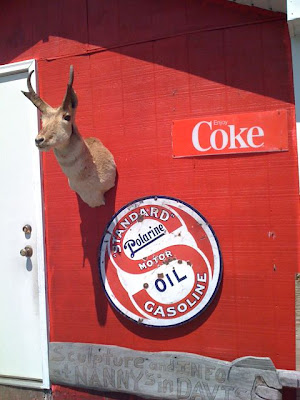 I recently returned from a week in the United States. I accompanied my mother back home after she fell in Prague and broke her hip.

I'd thought I'd share a few random photos from my trip, just little scenes of Americana that captured my fancy. 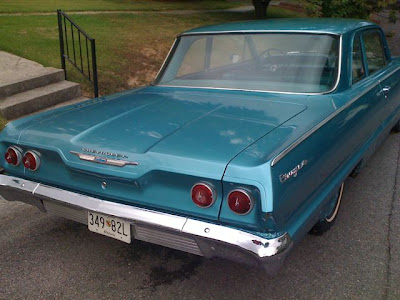 A cool Chevrolet Biscayne -- from 1962, I think -- parked on my mom's street in Cumberland, Maryland. 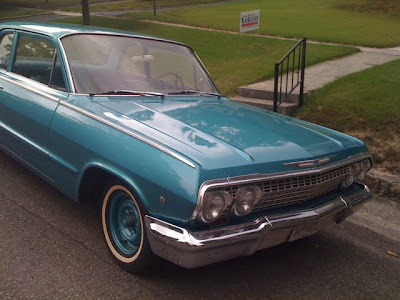 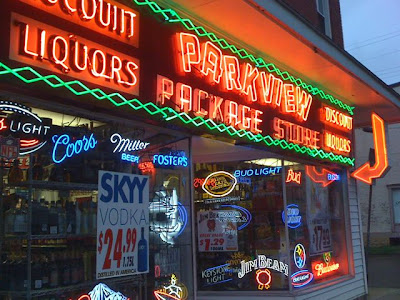 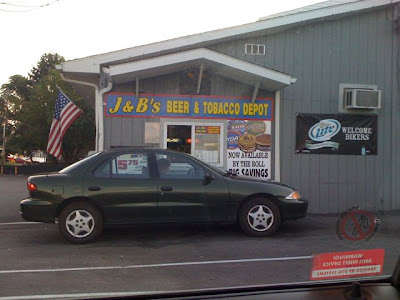 Drive-thru cigarettes and beer in Ridgeley, West Virginia. The line was five or six cars long when I drove past.
Posted by Grant Podelco at 12:49 PM 1 comment:

Riding A Paternoster, And Living To Tell The Tale

I am fascinated by a device called a paternoster.

If you're reading this in the United States, you probably don't have the foggiest idea what I'm talking about. That's because paternosters don't exist in the U.S., as far as I know, because they are a lawsuit waiting to happen.

The shelves then continue up -- usually passengerless -- and then change direction in some dark, cobwebby corner of the building, and then continue their journey down. It's an endless loop. (Ostensibly, you can stay on the paternoster while it makes its transition from up to down, but warning signs in bright red urge passengers to disembark.)

It's easy to misjudge the speed of the paternoster and either step on or off too early or too late. If you're elderly or a kid or pushing a baby carriage or just not paying attention, you're toast. Take the stairs.

There are more than 100 paternosters scattered around Eastern and Western Europe and Russia. But their numbers are dwindling due to numerous injuries and, yes, even deaths blamed on paternosters. According to Wikipedia, five people were killed while riding paternosters between 1970 and 1993.

A few days ago, I rode a paternoster in the Pasáž Lucerna -- an old indoor mall, of sorts -- in central Prague. I filmed my ride and put together a little narrated film of my experience.

Pie In The Sky (Almost) -- Dining In Delta's 'Business Elite' 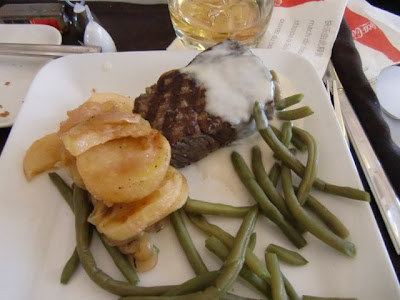 The filet of beef and horseradish sauce, lyonnaise potatoes, and haricots verts.

You can't go home again, Thomas Wolfe famously said. If he'd been a frequent flyer in today's world, he might have said you can't go back to coach.

As everyone who's ever done it has remarked afterward, once you've had the pleasure of flying in first class or business class, especially on a trans-Atlantic flight or trans-Pacific flight, it's damn near impossible -- indeed, physically painful -- to walk through first-class with the other cattle to the back of the plane on your next flight, knowing, finally, what you're missing.

I'm a Delta frequent flyer and have been fortunate enough to have flown in their equivalent of first class, called Business Elite, a half-dozen times or so. (Delta combined their first- and business-class seats into one class.) It's always been because I've purchased a more-expensive "upgradeable" ticket and then used 50,000 or so of my frequent flyer miles to upgrade to Business Elite.

It's expensive but worth the splurge every once in a while. 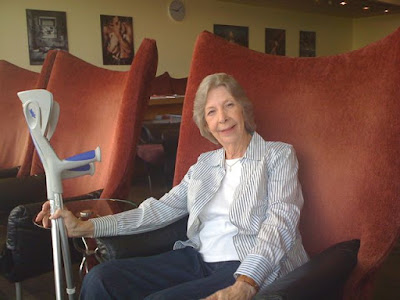 Mitz chilling in the business-class lounge at the Prague airport.

Delta's Business Elite is really quite comfortable, although not nearly as luxurious as some other airlines, or so I've heard. I'm 6 foot 3 inches (about 190 centimeters) and am unable to touch the seat in front of me with my toes, even if I stretch. The seats could be wider, but they do recline almost to horizontal, and there's a thick blanket and a big pillow to help you sleep. There's also a personal video screen at each seat with on-demand movies, games and TV shows.

But for me, the food and drink is the real entertainment.

I recently accompanied my mother back to the United States from Prague. She'd come to visit but fell and broke her hip a few days after she arrived. (You can read more about that here.) She needed a helping hand on her return journey. 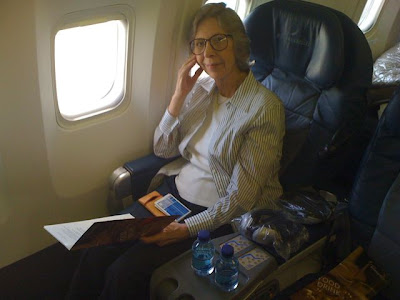 My mom, Mitz, trying to decide whether to have the filet of beef or the roasted chicken breast.

When we arrived at the airport in Prague for our flight to New York, we discovered that they'd overbooked the flight and were making seats available in coach by upgrading frequent flyers to Business Elite, including my mother and me. I couldn't have been more tickled, since, in addition to the food and drink and leg room, the seats meant my mom could raise and support her legs for the entire flight.

So, what'd we eat and drink, and how good was it, really?

I started out with a glass (a real glass) of crisp Piper-Heidsieck Brut Champagne as we got ourselves situated.

Once in the air, I switched to a glass (again, a real glass) of small-batch Woodford Reserve bourbon on the rocks, which blew my socks off, it was so good. (Hard to believe, but that's Delta's "house" bourbon.) I soon had another. Smooth, spicy, with notes of luscious caramel.

Then it was time for the main meal, served on a linen tablecloth and on real china with real cutlery, all of which sounds trivial and pretentious but somehow makes the whole dining experience feel slightly decadent.

We started with a subtle cream of cauliflower soup, grilled rosemary shrimp (small and forgettable), a few cold asparagus spears with herb butter (ditto), and a hearty pumpernickel roll. That was followed by a remarkably fresh mixed green salad with cucumber, tomato and almonds. 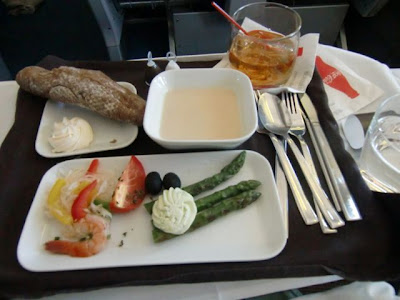 For the main course, both my mother and I chose the "Tender Fillet of Beef," advertised as "enhanced by horseradish sauce, served with lyonnaise potatoes and sauteed haricots verts." The generous slab of beef -- though overcooked to an everyman's medium-well -- was awakened by the surprisingly tasty horseradish sauce. The potatoes were also quite flavorful for 35,000 feet. The beans were forgettable and suffered from being splayed across the plate. (My mom's plate was a bit more appealing to the eye.)

Other choices on that flight for the main course included Roasted Chicken Breast, Spiral Pasta, and Roast Beef and Smoked Salmon.

As for the wine, I chose the full-bodied, peppery goodness of Renwood Winery Sierra Foothills Zinfandel 2007 from California. I could also have had a 2005 Burgess Merlot from Napa Valley.

As for whites, my mom had the the Patz & Hall Dutton Ranch Chardonnay, Russian River Valley, California, 2006, which she quite enjoyed. She could also have chosen the Michel Leon Vin d'Alsace Riesling, Alsace, France, 2008. 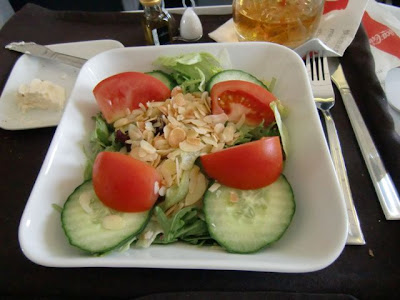 A fresh mixed green salad with cucumber, tomato and almonds.

For dessert, I chose a selection of "fine cheeses" and a glass of the Chambers Rosewood Muscat, Rutherglen, Australia, while my mom opted for the warm chocolate cake and coffee. We could also have chosen a made-to-order ice cream sundae, made with all-natural vanilla ice cream and a choice of sauces, whipped cream and chopped nuts. 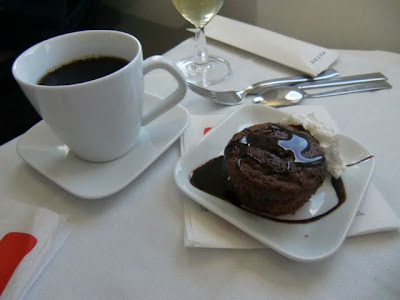 My mom's warm chocolate cake with chocolate syrup and whipped cream, and a decent cup of coffee. 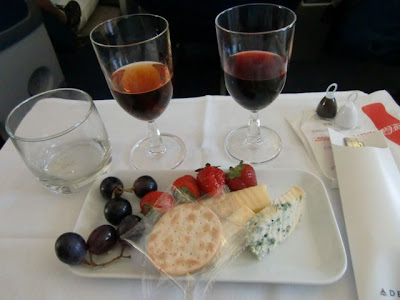 A selection of "fine cheeses" for me, and a glass of muscat.

The meal wasn't quite as high-class as all the fancy words make it sound, but there's no denying that the meal, served by ever-smiling flight attendants, was thoroughly enjoyable from start to finish. And if you're of a mind to indulge, the wine and liquor never stop flowing.

For what they call the "Pre-Arrival Meal," we were served an absolutely delicious roasted chicken breast sandwich, topped with pesto and provolone and a cold salad plate with smoked salmon. For some reason, that chicken sandwich really hit the spot. Perhaps because I hadn't expected anything with so much flavor for a meal that could easily be treated as an afterthought. 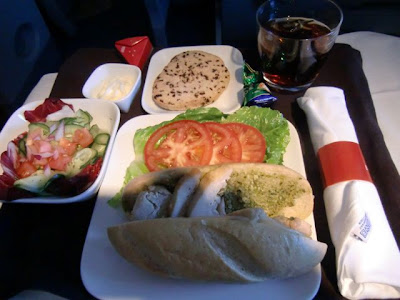 My mom, who had never flown first class or business class in her life, could not have been more thrilled by the flight, which made me enjoy it all the more. The food wouldn't win any awards on the ground (except, perhaps, for that chicken sandwich), but the meals and the extra room and comfy seats and in-flight entertainment and the smiling flight attendants and, yes, the ever-flowing alcohol combine for a truly memorable experience.

Daisy and I are treating ourselves to Business Elite when we fly to the United States later this month to get married. Emma will be traveling with us, of course, and I'm betting that that ice-cream cart could be in some serious trouble. 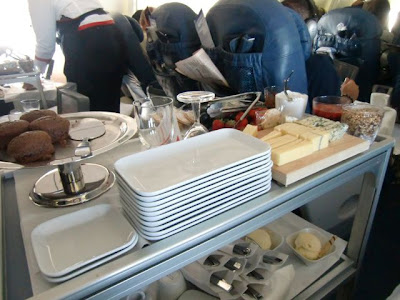 The dessert cart making its way down the aisle. 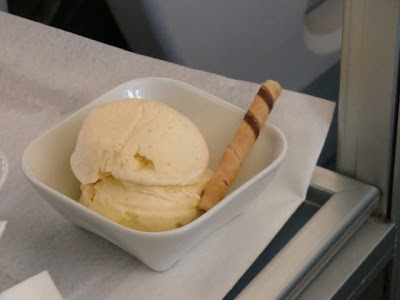 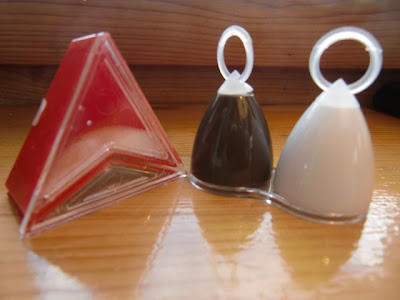 As a design buff, I was quite taken with these miniature salt-and-pepper shakers, a different set served with the two meals.
Posted by Grant Podelco at 10:47 AM 5 comments: 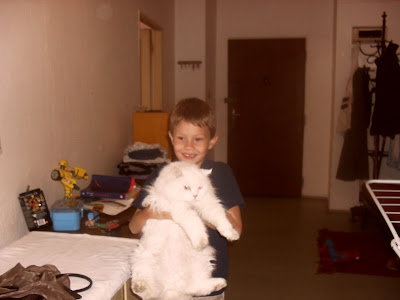 Chaz in his new home.

Just a quick update on Sassy/Chaz, the stray/lost Persian cat that we rescued and found a home for a few weeks ago. (You can read more about that adventure here and here.)

I recently received a lovely note and a photograph from Chaz's new owner that I wanted to share:

I want to let you know that Chaz is very happy. And is now with R---- whom he was quite surprised to see. I think Chaz thought it was going to just be him and I and was loving all the snuggling.

He loves to look at the top windows that are open and listen and watch the rain. He did this all night on Sunday evening.

I kept the same menu for him and bought him his same cat food and put together a clean litter box.

R---- likes to take an antique mirror and show him his reflection....giggle.

Very happy cat, indeed. My daughter Isabel really likes him. She says that he is very pretty and asked, "Where did you get him?" I told her the entire story. She was amazed!

He was well worth waiting for. He is truly magical.

Thank you once again for letting me adopt him.