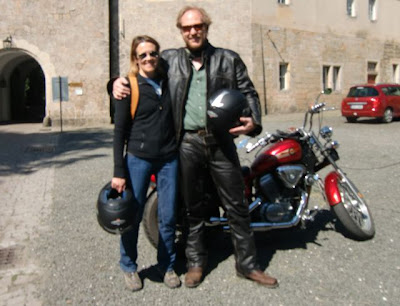 Daisy, me, and the Honda Shadow 600 outside the Hrubá Skála Chateau. Taken by a passer-by and, sadly, slightly out of focus.

Ever since I got my Czech motorcycle license two years ago, and bought my 2002 Honda Shadow 600, I've had this dream of going on an overnight motorcycle trip with Daisy.

While that may strike you as a perfectly reasonable goal given that 1) I have a motorcycle, and 2) Daisy was entirely agreeable to the idea, somehow I just hadn't been able to get it together. 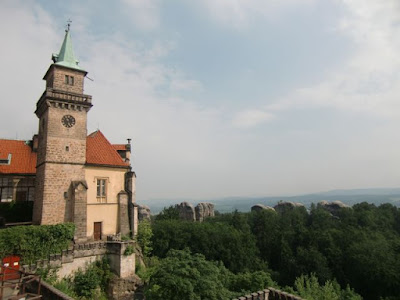 Part of it, I’m sure, was a certain apprehension to committing to such an adventure. I'm a relatively new motorcycle rider, I don't have tons of experience riding with a passenger, Czech drivers are insane and aren't used to motorcycles sharing their highways, and I don't speak the language all that well, should a problem arise.

Uneasy rider, if you will.

But when you've got a blog called Gusto, there's not much chance of backing out of something like this.

Which I did. Or I should say we did.

And where did we go? 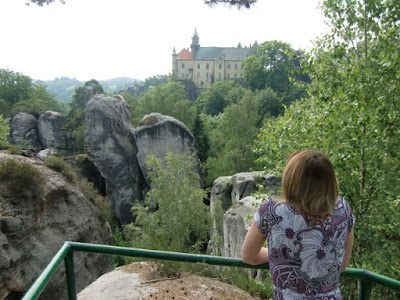 Daisy looks across to the chateau from one of the many overlooks.

We decided to check out Český Ráj, or Czech Paradise, a justly celebrated region of the Czech Republic that we had somehow, in all our years of living here, never visited. It's famous for its spectacular sandstone rock towers and its Middle Earth-like landscape in the valleys below. The hiking is superb, and I was looking forward to working up a mean thirst.

Plus, Český Ráj is only some 120 kilometers or so from our house in Černý Vůl, at least via the country-road route I chose for this trek -- a quite manageable two-hour ride or so on the motorcycle. (It's more like 90 kilometers on the highways direct from Prague.) 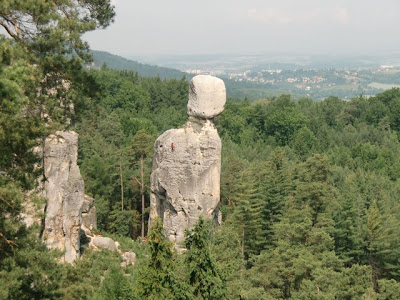 Climbers scaling one of the many spectacular rock towers. 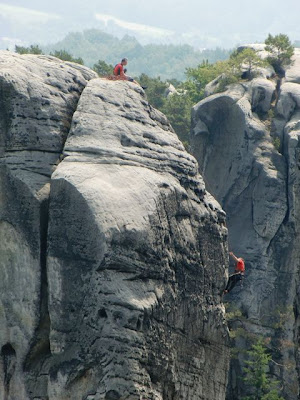 I reserved a "luxe" room at the 14th-century Hrubá Skála Chateau or castle, in Hrubá Skála, a village around 6 kilometers southeast of Turnov, which had been recommended to me by a couple of friends, one of whom got married there. It commands sweeping views of that part of Český Ráj and is surrounded by the aforementioned sandstone monoliths.

So after work on a recent Friday, we went home, threw off our work clothes, dressed in our biking finest, stuffed my Honda saddlebags with the bare essentials (underwear, toiletries, backgammon, a bottle of Bohemia Sekt Brut), slipped on our helmets, and hit the road. 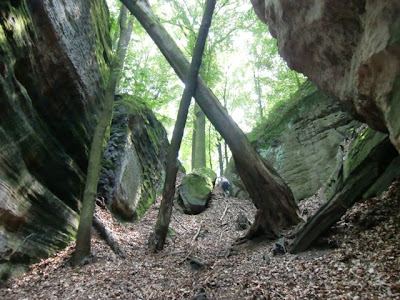 And you know what? As soon as rubber met road, all my apprehension disappeared, like those big trucks in my rear-view mirror. The sun was shining, the tank was full, the weekend lay ahead, and my baby was behind me.

As someone once said, only a biker knows why a dog sticks his head out of a car window. What a thrill it is to be zipping along winding country roads, leaning this way and that, the wind in your face, the smells of manure and flowers and wheat fields baking in the sun wafting around inside your helmet. 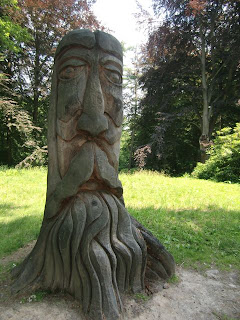 And I still get a kick out of observing that unwritten code of motorcycling (I had to learn it by experience; no one ever tells you these things) -- that is, always waving, nonchalantly, at other motorcyclists passing in the opposite direction. Just an effortless extension and slight turn of the left wrist, or a slowly extended left foot if your hands are otherwise occupied. (And distinctions are definitely made for those riding on whiny Vespas or other type of scooters. They don't deserve waves.)

We meandered from Černý Vůl to Kralupy, up to Velvary, over to Melnik, then connected to Mladá Boleslav, up to Turnov, and then a few more kilometers to our destination -- up the winding, leafy, sun-dappled country road to the spectacularly situated Hrubá Skála.

At Hrubá Skála, I parked the bike, killed the engine, and thought, "We made it!"

How was the hotel? Well, you couldn't ask for a better location, but it's sorely in need of someone to read the staff the proverbial Riot Act. Food at the restaurant was OK but seriously hampered by lackadaisical, albeit friendly, service. We ate outside on the terrace overlooking the valley and saw many couples waiting endlessly to get noticed by the waiters.

Even though we were generally fairly served in comparison, watching other couples be ignored kinda ruins your own meal, you know?

The breakfast "buffet" the next morning was also one of the saddest such displays we've encountered. Bland, unimaginative food, and atrocious attention to items that had run out, like coffee and milk, let alone eggs and bread. Even though we arrived a full hour before breakfast ended, there was little left to choose from except a few slices of cheese and meat and one boiled hot dog.) 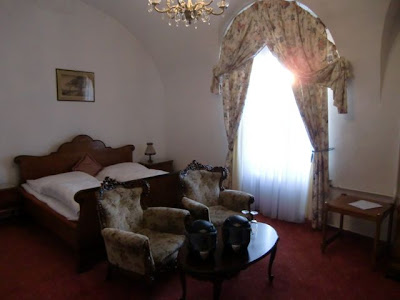 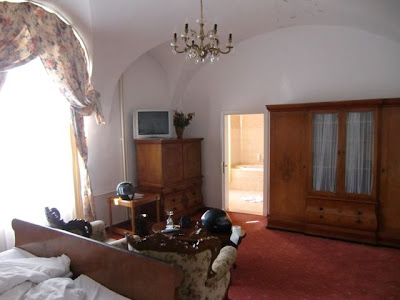 Another view of our room. 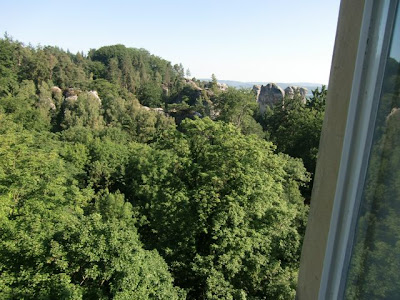 The view from our hotel window.

Our "luxe" room -- No. 122, which set us back around $115 per night) was quite lovely and had its own spacious toilet facilities (a rarity at this hotel, where most of the rooms share baths down the hall). Horrifyingly, however, the jacuzzi bathtub was suffering from a rather large infestation of ants, most of them, interestingly, winged.

After I brought the problem to her attention, the woman at the front desk quickly offered us another room, but it was a standard double and paled in comparison. Housekeeping was gone for the day, so Daisy bravely tackled the vermin with a can of Raid while I sipped a beer on the terrace. (Hey, she volunteered!) 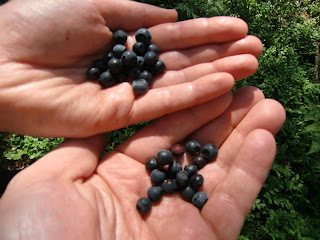 We never saw another ant for the rest of the weekend, and spent the rest of our time hiking, sleeping, eating, and drinking.

We explored all the trails winding around above, below and around the chateau. We gawked at the rock climbers scaling the sandstone towers, and discovered a hushed memorial to fallen Czech climbers hidden deep in the forest. We picked wild blueberries (at least that's what I think they were) in the forest, and drank a few beers and had a snack at a whimsical teahouse nestled within a tiny arboretum not far from the chateau. 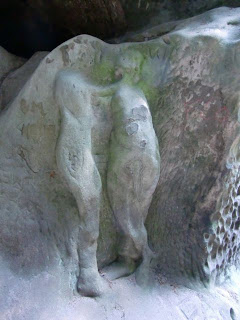 We had a great time.

Despite all that, though, I couldn't wait to get back on the Shadow on Sunday for the ride home. My confidence had been firmly rooted. We took a different route back, this time mostly on highway all the way back to Prague.

We reached a top speed of around 112 kph, which for me, especially with a passenger, is quite fast. There's no windshield on my bike, and you'd be surprised at how hard the wind pounds you in the chest when you're going 90 or 100 kph. Choppers are meant for slow, easy riding, which is why the country roads around here are so perfect. That's my kind of riding. 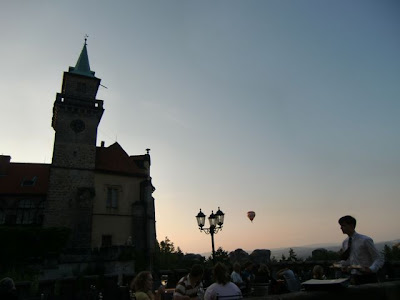 As we ate dinner on Saturday night, a hot-air balloon drifted over the castle.

Now, we're planning to go back, perhaps to explore the trails around the more touristy Prachovské skály area of Český Ráj. And that's just the thing. Even though the chateau left a lot to be desired in many significant areas, we'd probably stay there again when we revisit this area. It felt rather private and a lot less trampled than what we saw of Prachovské skály as we drove past on the way home.

We'll take Emma back with us next time. Then again, there was a decent looking campground near Prachovské Skály, so we might just go that route, too. 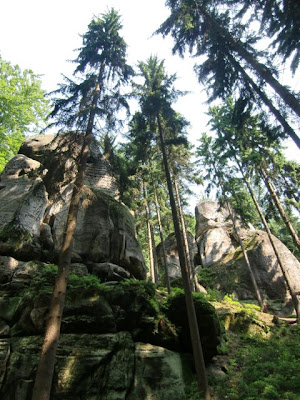 The Middle Earth-like rock formations and valleys surrounding the chateau (above and below). 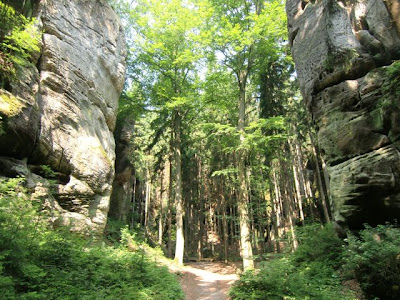 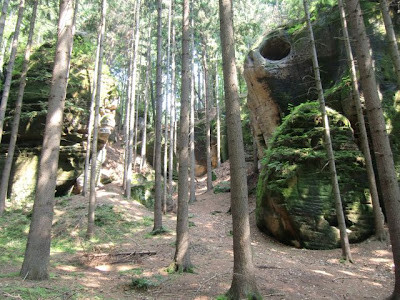 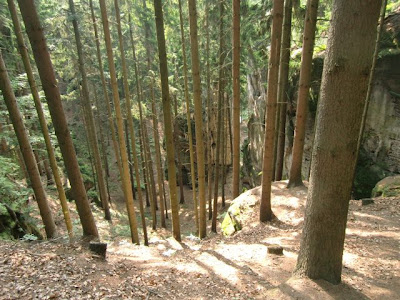 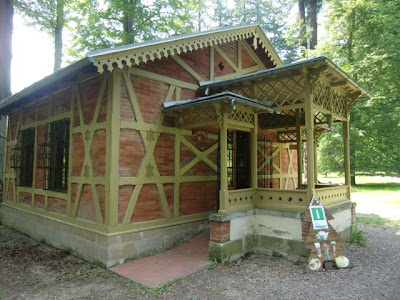 A charming little teahouse in an arboretum near the chateau. In addition to tea, they served beer and light snacks, as well as homemade tie-died clothing. Very cool. 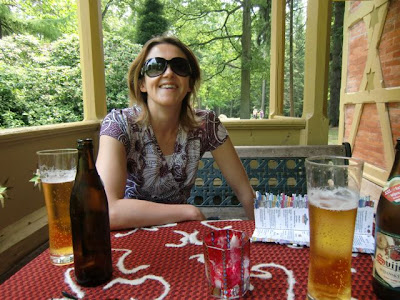 Enjoying a few beers and some surprisingly tasty couscous at the teahouse. 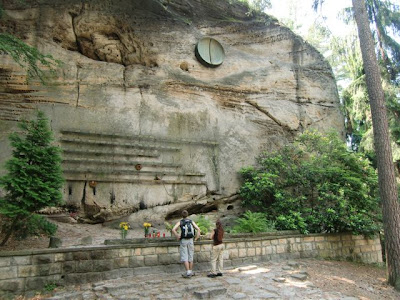 A memorial to fallen Czech climbers deep in the forest near the chateau. 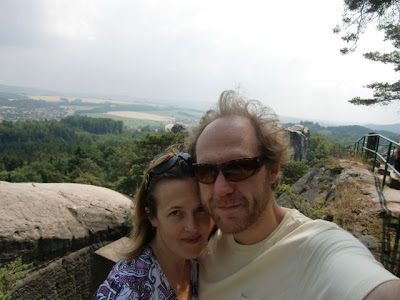 Someone in this photo needs a haircut. 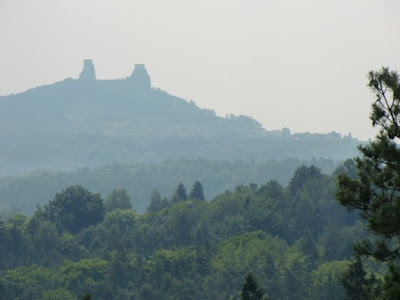 The twin towers of the 14th-century Trosky Castle overlook the Český Ráj region. 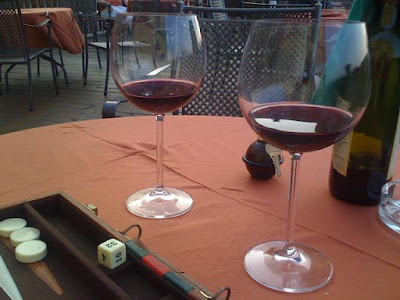 Wine and backgammon on the terrace. 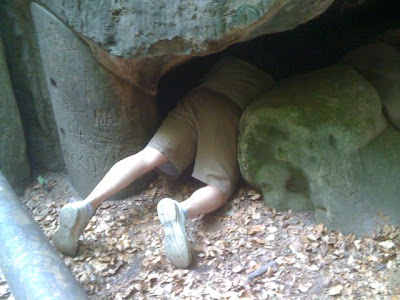 Trying, unsuccessfully (and rather ridiculously), to locate my first geocache near the Adam's Bed rock formation.
Posted by Grant Podelco at 9:31 AM 3 comments: