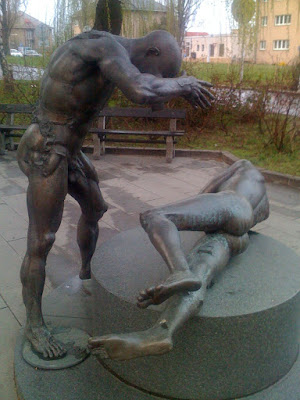 I've visited the military hospital quite a few times now, and I still puzzle over the meaning of this unsettling sculpture inside the grounds. The man hovering over the naked woman is wearing a scuba mask. Bizarre.

I didn't want to press the panic button.

I was getting an MRI at Prague's Central Military Hospital. My left shoulder had been bothering me for a few months, and cortisone shots and physical therapy had had no effect. The pain just kept getting worse.

I showed up at the hospital at the end of a day that had already been hectic and stressful, and frankly I hadn't given the MRI much thought.

I was taken to a subterranean level of the hospital, through dark corridors, to a room housing the machine. I was told to remove all of my clothing except my underwear. I was told to walk through a metal detector -- I guess to make sure I didn't have a hidden titanium plate in my head or something.

Then I was unceremoniously led into the room housing the MRI, a hulking behemoth of a machine, like some leftover part from an old Soyuz rocket. 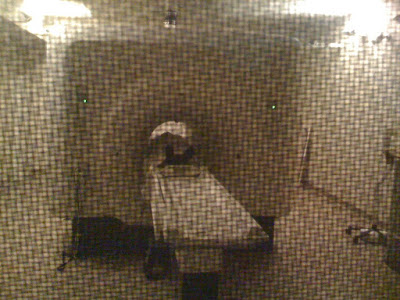 The MRI machine in question, taken through the window of the observation room.

I was told to lie down on my back on a cold sliding slab, and the attendant put a squeeze bulb in my right hand.

"Just press this if you have any trouble," he said.

I honestly didn't know what he could be talking about. I hadn't given my MRI any thought. I hadn't done any research about what to expect during an MRI. I just figured it would be a painless way to see inside my shoulder.

Then he slid the slab inside the mouth of the beast, and I instantly knew what the panic button was for.

Laying on my back, I could not see out the bottom of the tube at my feet, nor could I see out the other end, above my head. The roof of the machine was about a thumb's length from the tip of my nose.

My heart was racing. I felt that I was going to scream.

And then they turned the MRI on. 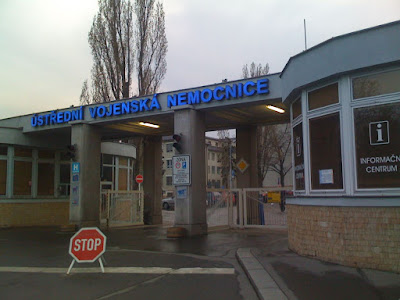 Now, since my MRI experience, I've done some research, and have spoken with friends who've had MRIs themselves. They've told me that they were given headphones and asked what kind of music they'd like to hear. Another friend was given headphones, although no music.

Everyone, except me, had been briefed ahead of time about what to expect, asked if they were claustrophobic.

I was not briefed, nor given headphones and a choice of music. And you really need headphones because an MRI is REALLY, REALLY LOUD AND KINDA SCARY SOUNDING.

The noise sounds like something from a science-fiction movie. A vibrating magnetic whine, almost like an alarm, the kinds of signal that would alert an entire city that something's gone horribly wrong in the local nuclear power plant.

Here's a video I found on YouTube that will give you some idea of the sound of an MRI. But believe me, when you're stuck inside, the sound is amplified many times over:

So there I am, freaking out about being stuck in a coffin, and to top it all off, there's this unnerving noise blasting through my skull.

At first I laid there with my eyes open, but soon realized that was a very, very bad idea. I closed them, and tried to take my mind to a happy, peaceful, magical place. I felt myself consciously trying to control my mind, thinking to myself, "Calm down, Grant. You can survive this."

I thought of our vacations in Croatia, swimming in the clear, clean Adriatic and drinking wine and eating grilled calamari. I thought of the breeze whispering through the pines along the shore.

After about 10 minutes, the noise stopped. I thought I had survived. I had done it!

I waited for them to pull me out.

Then the noise began again.

I could feel the panic bulb in my sweaty hand. I thought hard about squeezing it.

After another 10 minutes, the noise stopped again. Surely, it's over, I thought.

After a few minutes of silence, the MRI fired up again. I thought to myself, if you knew a terrorist was claustrophobic, an MRI would be far more effective than water-boarding. Would such a scenario constitute torture?

After another 10 minutes or so, it was over. I felt the slab moving, and I was pulled out.

The tissue paper I was lying on was soaked with sweat. But I hadn't pushed the panic button.

"Now I see why you need the panic button," I said. "That's insane."

"Does anyone actually use the panic button?" I asked.

Perhaps women are statistically more susceptible to claustrophobia than men. Who knows? I was just happy to have been rescued, surprised that I had survived, and amazed at how life throws you these unexpected little adventures.

Turns out the MRI showed that my acromioclavicular joint -- the joint at the top of the shoulder -- is, as the doctor put it, "destroyed."

I decided to have surgery.

That's a whole 'nother story.
Posted by Grant Podelco at 9:31 AM No comments:

Bulgaria, Inside And In Style 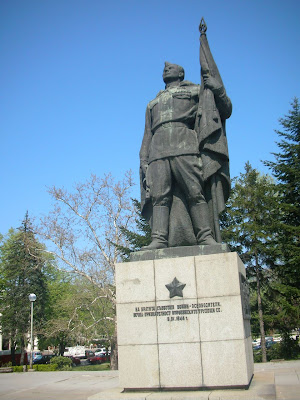 Daisy, Emma and I took a memorable trip to Bulgaria a few weeks ago.

We got to see the country inside out, in a way, because we went with our close friends, Momchil Blagoev and his wife, Tanya Kancheva, and their son Victor.

Momchil and Tanya were born and raised in Bulgaria, and by traveling with them, we were offered a window seat to their world, to their Bulgaria.

We ate lots of incredible home-cooked food -- from drob sarma, a subtle Bulgarian lamb and rice pie, to what seemed to me to be an entire roasted lamb, cooked to perfection. We drank what seemed like liters of homemade rakia, a fruit brandy that packs a powerful punch. (Check out my separate slideshow on the food of Bulgaria.)

We saw chickens hatching from eggs in the kitchen of Momchil's parents; hand-colored Easter eggs in the kitchen of Tanya's parents in the city of Ruse, in northern Bulgaria; sipped glasses of exquisite Merlot and Cabernet Sauvignon straight from oak barrels in the vast aging room at the Bessa Valley vineyards; and strolled beside the Danube in the sunshine.

We took a cable car to the still-snow-capped peak of Mt. Vitosha, looming over Sofia (accent on the first syllable, if you please); toured the broadcasting center of the world-famous Bulgarian National Radio, thanks to our old colleague, Stefan Radovanov, who is now the very important director of programming there; and were surprised to find the president of Bulgaria, Georgi Parvanov, walk right past us at an outdoor book market.

On a rainy, misty morning, we strolled through the quiet courtyards of the Troyan Monastery and lit a candle in its early 19th-century Church of Sveta Bogoroditsa, and took a trip back to 19th-century Bulgaria on the colorful streets of the open-air ethnographic museum known as Etera. And I held my own against Momchil's father, Lubo, in some intense games of backgammon, where I learned -- and have since, sadly, forgotten -- some cool Turkish words for double ones, double twos, etc.

At every turn, we were treated like royalty, feted and fed and lubricated beyond compare. We can't thank both families enough. Their generosity and graciousness and, well, love will be impossible to repay, but we'll do our best next time they come to Prague.

Click for a full slideshow with captions.
Posted by Grant Podelco at 7:28 PM 3 comments: