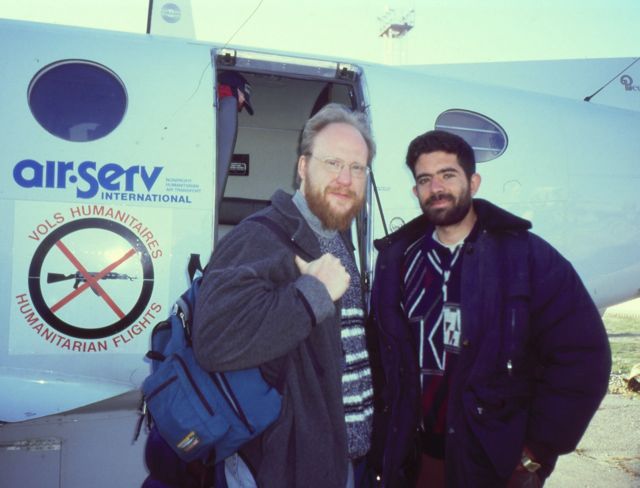 At the airport in Kabul, before boarding our small prop for Mustafa's first-ever airplane ride. Turned out we were the only passengers. It was like having a private jet fly us across Afghanistan.

I recently had the pleasure of eating a gourmet Afghan dinner at the Prague home of my dear friend, Mustafa Sarwar. (You can see photos of the meal below.)

I first met Mustafa in November 2002 at the Kabul Bureau of Radio Free Europe/Radio Liberty. I'd been sent by RFE/RL to cover the situation in Afghanistan one year after the fall of the Taliban. I'd spend a month in the country and would need a "fixer" -- someone who spoke English as well as Pashto and Dari, someone who knew the chaotic city and could help me set up interviews, translate interiews, and generally steer me in the right direction.

Mustafa was that man.

I spent every day of that month with Mustafa. I could not have asked for a smarter, more capable or more sociable companion. Any reporting successes I enjoyed in Afghanistan I owe entirely to Mustafa. It was one of the greatest experiences of my life.

One of my fondest memories was being able to arrange Mustafa's first airplane ride. We needed to get to the western city of Herat, and driving was not an option. We booked passage on a charter airline used primarily by UN and NGO workers. I think the prop plane sat about eight people, but when we showed up for our flight at Kabul airport, we discovered that we would be the only passengers. 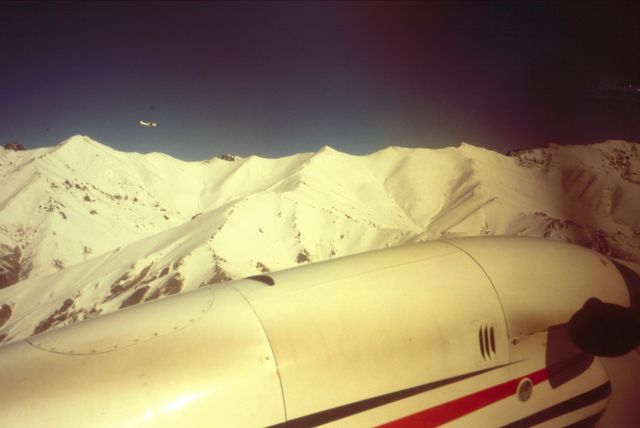 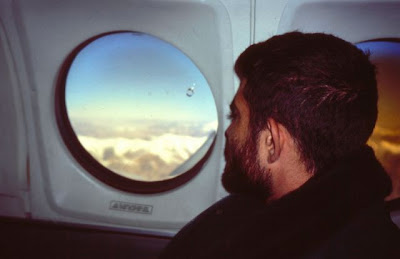 Mustafa sees his vast country from the air for the first time.

We marveled at the view as we cruised just above the snow-upholstered mountains of the Hindu Kush, tiny settlements -- effectively cut off from civilization -- just visible in the nooks and crannies of the valleys and mountainsides.

At some point, Mustafa turned to me and said, "You know, I'd always heard people describe Afghanistan as mountainous, or talk about how difficult it is to get food and supplies to some of the remote Afghan villages, but I never really knew what they meant. Now I know." 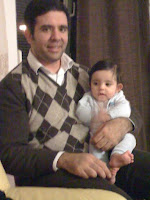 I left Afghanistan, exhausted and exhilarated.

Mustafa remained to continue his medical studies at Kabul University. We kept in touch, and Mustafa's career eventually led him away from medicine and toward journalism. He became a famous anchorman on Tolo TV, Afghanistan's most popular television station, becoming the "Afghan Dan Rather," as I heard him described -- a celebrity regularly recognized on the streets of the Afghan capital.

To make a long story short, he was eventually hired full-time by RFE/RL's Radio Free Afghanistan a few years ago to work as a journalist at our Prague headquarters. And he married a lovely Afghan woman named Bahar, who somehow found time to prepare the lavish meal Daisy and I enjoyed a few weeks back, while also keeping an eye on their two young sons -- Solomon, who's 4, and Arsalan, who's 9 months old.

I don't think I have ever eaten so much or enjoyed it more.

It was amazing to peek into Mustafa's new life in Prague and to think about all that had happened since we first met. He's even studying in Prague for a master's degree in professional communication and public relations from La Salle University.

I'm so happy for Mustafa -- for his new life, for his new wife and children, for his successful journalism career, and for all the new friends he's made.

All the best, my friend. 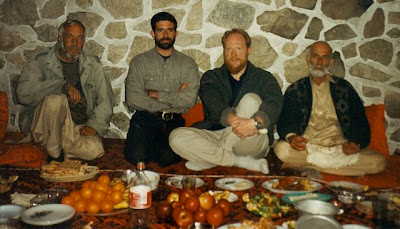 While I was in Afghanistan, I was the guest of honor when Mustafa invited me to his home in Kabul. It was another memorable meal. I'm pictured here with Mustafa's father, Mohmmad Sarwar Siddiqi (on the right), Mustafa's uncle, Mohammed Karim, who served as our driver (on the left), and Mustafa (second from left). 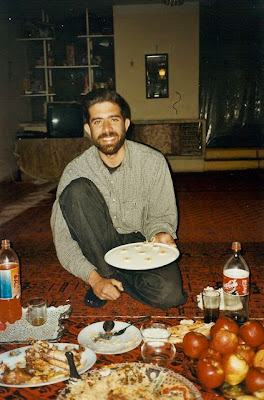 Mustafa in November 2002, offering me dessert. How could I refuse? 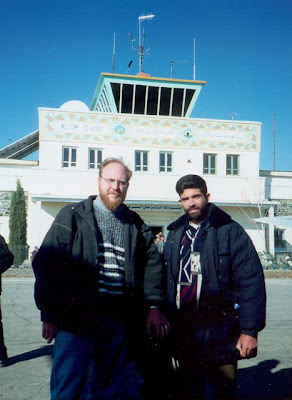 Mustafa and I just after our arrival in the western Afghan city of Herat, at that time ruled by Ismail Khan as his personal fiefdom. 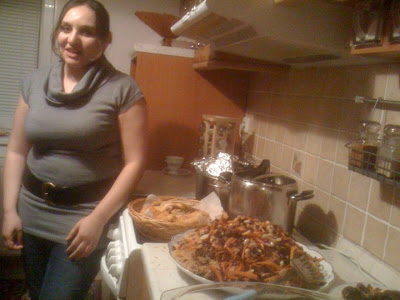 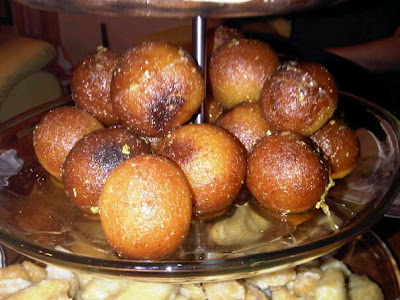 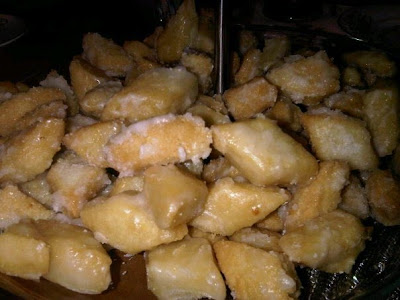 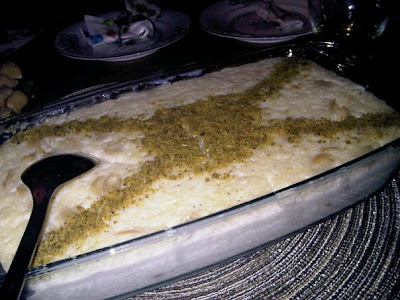 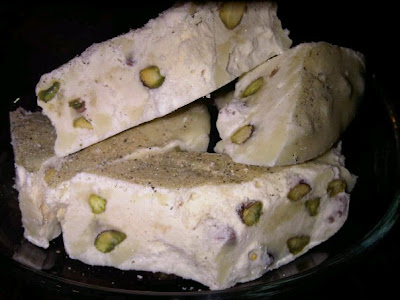 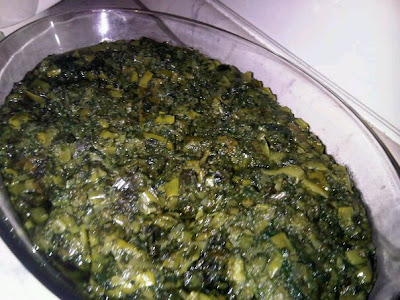 Spinach. Not usually my favorite, but this was truly amazing 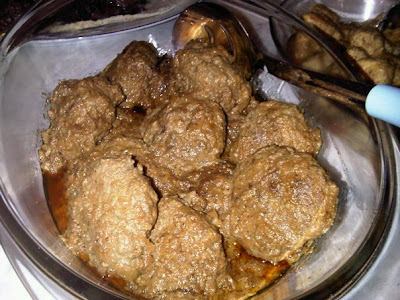 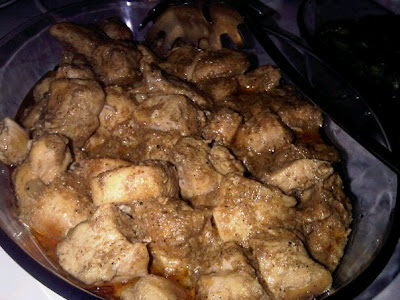 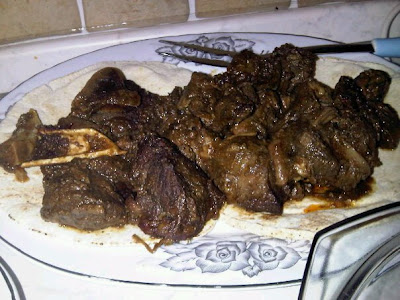 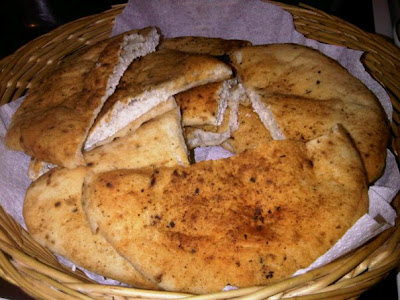 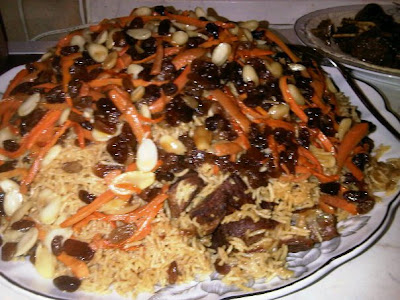 Saffron rice cooked with lamb and garnished with sweet carrots, raisins and nuts. It's called Qabeli Palaw.
Posted by Grant Podelco at 11:32 AM 2 comments:

Found this ticket stub today as I was cleaning out my desk drawer.

One of my Top 10 all-time concerts.

If you live in Prague, you'll know Akropolis is an intimate little venue, a perfect place to see the U.S. "It" band of 2002, before they hit it big worldwide. Fantastic show.

I'm looking forward to their new album, "Angles," coming out on March 22.
Posted by Grant Podelco at 2:55 PM No comments: 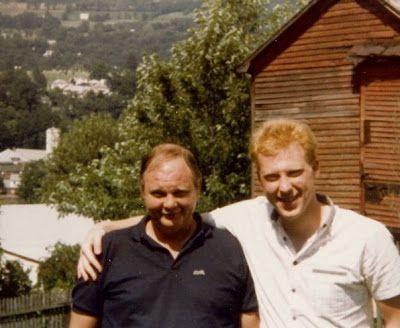 I've always loved this photograph of my dad and me in the yard of his family home where he was born -- and where his sister still lived at the time -- in Piedmont, West Virginia. This was probably taken sometime around 1985.

I've been thinking a lot about my dad lately.

Edward E. Podelco passed away at home, in the living room that he loved so much, on February 17 of last year, but it seems he's been more on my mind over the past few weeks than he was when it all came down.

He and I had a tempestuous relationship, although we were good at the end, and I was glad that I had been able to fly home and be with him when he ended up in the hospital in early January 2010. For some reason, he liked to call me "Champ," and did so right to the end.

Though we had our differences, one of the things that I credit him with, looking back now, is instilling in me a love of music and the arts, and of writing. He's probably, in his way, the reason I'm a journalist today (although he had always wanted me to be a doctor or a lawyer). My mother, too, loves music, and growing up our house was always filled with LPs of Sinatra or Dean Martin, Eddy Arnold, Placido Domingo, Pavarotti, Liberace, The Letterman, Glen Campbell, The Fifth Dimension, or The Carpenters stacked on the turntable.

Since he's been on my mind, I was trying to think of something I could do here to pay him a small tribute. I didn't want to write something schmaltzy, or anything schmaltzier than I've already written. 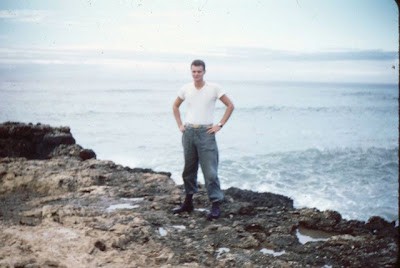 My dad served as a radio operator in the U.S. Army in Hawaii and the Philippines in the mid-1950s. I have a few slides he took of himself during those days, and recently scanned one in. I'd guess this is Hawaii, but it's hard to tell.

Quite by accident, I came across a small stack of slides in my desk drawer the other day, wrapped tightly in a rubber band. Back in the late 1980s, I'd asked my dad -- who liked to paint -- to have professional slides taken of a selection of his oil paintings in the hopes that I could somehow get him a show at a gallery in Syracuse, New York, where I was living at the time. That show never happened, but I kept the slides, and I thought I'd show the world some of his work on this, the first anniversary of his death. (There are some just below, and more at the very bottom of this post.) 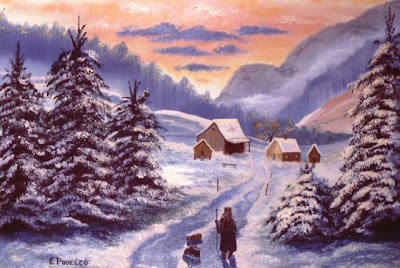 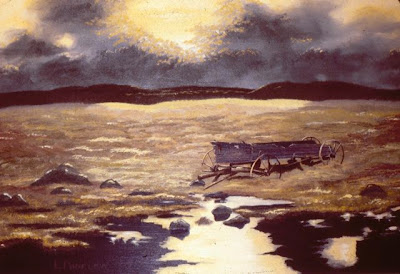 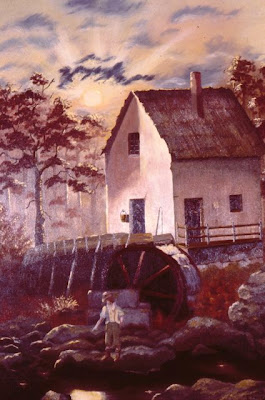 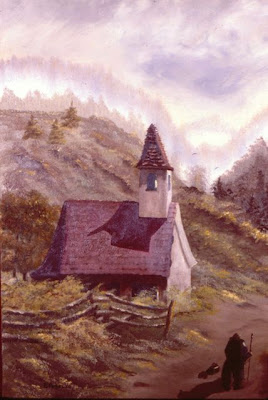 His paintings reflect his hardscrabble upbringing. He was born and grew up in the tiny town of Piedmont, West Virginia. His own father was a coal miner. The area was poor, and the people were hard, and I think that those are the people you see in his paintings. One of his pictures is hanging on my office wall as I write this.

Many of these painting were sold at auction when my mom moved out of her house last autumn. They're now out in the world, hopefully hanging on someone's wall, and appreciated. My dad would have liked that. 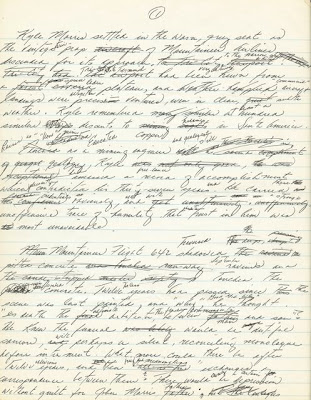 A page from the manuscript to "Portal Sun," in my father's distinctive handwriting.

My dad also liked to write, and after his death I found the manuscript to at least one short story, about a spelunking priest called "Show Me, God," and the fragment of a novel he called "Portal Sun." In the foreward to "Portal Sun," my dad writes:

The time is, perhaps, any year during the last 20. The place might well as be West Virginia, Kentucky, Pennsylvania, or southern Illinois where many, many similar dramas have and are being lived. ... The intent of "Portal Sun" is to pay tribute to, and fictionally document the lives and times of a gallant breed who are involved in a magnificently complex and little understood industry where victories are momentary and defeats eternal. ... This book is, to great measure, a collection of sweetly disguised reminiscences of events and of people who are, today, active in the most dangerously glamorous of all industries -- coal mining.

From what I can gather from the hand-written and partially typewritten manuscript, here's the first paragraph of "Portal Sun":

Cliff Roland settled in the worn, gray-tweed seat as the vintage twin-prop of Mountaineer Airlines descended for its approach to the narrow, obliterated strip. Tri-State Terminal had been, very literally, hewn from a spruce-laden plateau, and commercial aircraft landings were, altogether, precise ventures, even in clear, subtle weather. Cliff remembered at least a hundred similar descents to copper leases in South America.

Raised as a blood-heritage miner, educated as a mining engineer and geologist, Cliff Roland had amassed a free-lance record of accomplishment which pleasantly contradicted his 37 years. He carried these credentials so obviously, and yet with a strange unoffensive trace of humility, that absolute trust in him was immediate and unavoidable.

I hope you're having a grand time wherever you are, dad. I miss you. 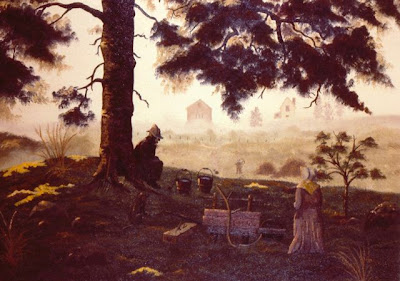 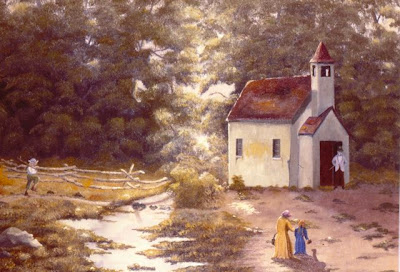 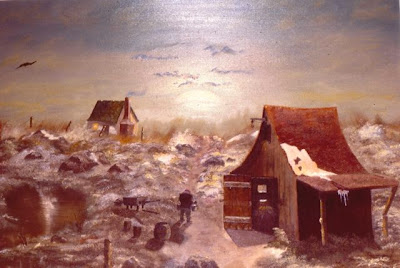