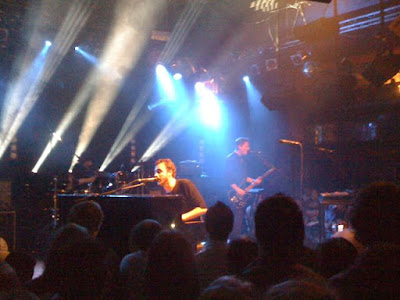 Daisy and I went to see Editors play the Lucerna Music Bar in Prague on November 28. They're a band from Birmingham, England, that really should be bigger worldwide than they are (although their first album has sold more than a million copies.) They're huge in the U.K. and were nominated for the Mercury Prize in 2006.

Their sweeping anthems remind me of Coldplay, U2 or Snow Patrol, and lead singer Tom Smith's voice is reminiscent of Ian McCullough of Echo & The Bunnymen or even Jim Morrison. 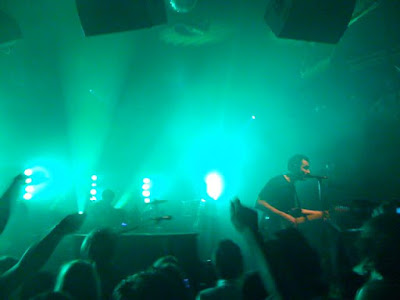 I really love their music, but must admit to having been left a little cold by their latest album, "In This Light And On This Evening," where the band takes a more electronic approach.

Live, however, that album really rocked. I was impressed.

It was one of the best shows I've seen, and to see them in such an intimate venue was a real treat. We were about two meters from the front of the stage, in a perfect position to see Smith play keyboards and guitar and sing. Turns out he's quite the charismatic frontman, really losing himself in the music. He roamed the stage as if possessed.

Here are a couple of photos I took at the show with my iPhone, as well as a video from YouTube that someone else uploaded. It gives you a little taste of the show (although of course doesn't do it justice).

Posted by Grant Podelco at 10:34 AM No comments:

Maybe I Should Just Drink It 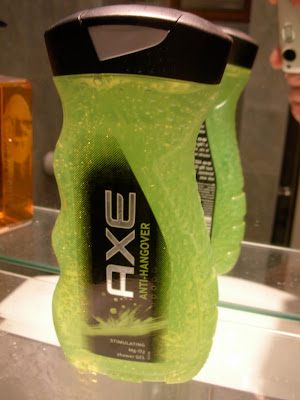 Bought this today in my local supermarket. It amuses me.

Pretty clever marketing. I would have liked to have sat in on that pitch meeting.

Funny, though, that it's only in English.
Posted by Grant Podelco at 5:38 PM 2 comments:

"Speed."
"Take 3. Scene 22. Sound 4."
"Slate it." Crack!
"Action!"
It's true. They really do say "Action!" and snap a slate before each scene. Everything is just the way it's supposed to be in the movies.
Except for me.
I'm a reporter, masquerading as an actor.

I used to do some crazy things in the name of journalism.

I was a newspaper editor and reporter for the "Syracuse Herald-Journal" in Syracuse, New York, from 1986 to 1995. I'm not sure how it started, but around 1989 I began writing a series of Plimpton-esque articles in which I inserted myself into some ridiculous situations for which I was ill-suited and then lived to tell the tale.

I was a stand-up comedian at a professional comedy club and a roving actor in a Renaissance faire. I rode in a hot-air balloon and bungee-jumped off a giant crane over a parking lot (although someone else in the newsroom beat me to the punch and filed their first-person account first).

I also auditioned for, and won, a small part in "Worst of Enemies" (original title "Constant Reminders"), a $240,000 film that was being filmed in Syracuse in 1989, co-written and directed by, and also starring, 26-year-old Garrett Abdo, a Syracuse native. It's about two best friends and the woman who comes between them.

Now it's time for makeup. Makeup. I'm having makeup put on my face. Eyeliner. ("Ouch!') And lipstick. (Eeewww!) I've never left a lipstick mark on a Styrofoam cup before. 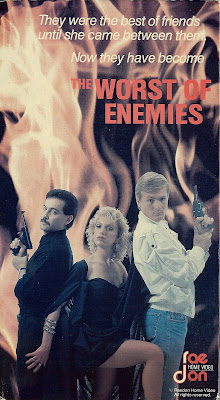 I played a waiter named "Bob," who's good friends with Abdo's main character, "Mitch." I had nine lines over two scenes -- a bit more than I bargained for when I came up with the idea of being an "extra."

I'd only seen the movie once, at its Syracuse premiere on the giant screen at the opulent Landmark Theatre. From there, I think it went straight to VHS and ended up in video rental shops across America, courtesy of infamous distributor Raedon Home Video.

I've been trying to find a copy ever since, but only recently had any luck -- courtesy of Amazon -- after hooking up with Abdo on Facebook. He's now managing a comedy club in Atlanta and says he recently finished his second feature film. He's doing well after all these years.

"The most amazing thing to me is that this idea I had in my head is coming to life," Abdo told me at the time. 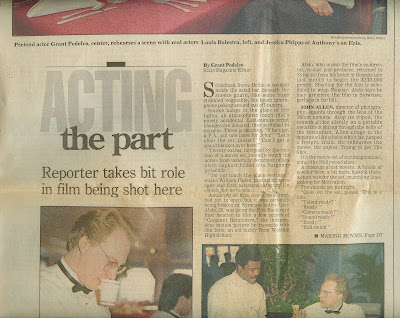 Part of my original story in the Syracuse Herald-Journal on May 4, 1989.

The copy of the film I received in the mail left a bit to be desired. The music's all woozy and the picture quality is pretty bad, but it has been 20 years, after all.

I had one of my scenes from "Worst of Enemies" transferred from VHS and uploaded to YouTube. It's posted above. See what you think. (Abdo is the guy in the moustache. I'm the guy dressed like a waiter.)

I had a fantastic time those many years ago and I am so glad I finally found a copy of the movie for my library.

All the best to Gary for allowing me to enter his world for a few days so many years ago.

And now, you'll have to excuse me. I've got to finish creating my page on IMDB.
Posted by Grant Podelco at 4:33 PM 7 comments:

An Unassuming Vintage With Hints Of Tobacco, Old Baseball Glove, and Dry Toast 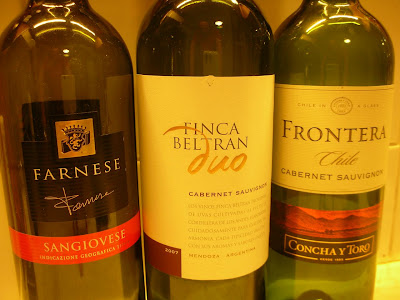 We had a little party at our place after the kids went trick-or-treating in Nebušice on October 31.

It turned into an impromptu wine tasting.

I recently discovered a fantastic wine shop in the village of Horoměřice, just up the road from our home here in the metropolis of Černý Vůl, west of Prague. The shop is called The Wine Depot, and it's right on the main intersection in Horoměřice.

Frankly, it's an unlikely place for a wine shop, but who's complaining? We don't have much to choose from out here, restaurantwise or shopwise. To have a decent wine shop within a five-minute drive is a revelation.

Sadly, I only recently decided to go in and check it out. I thought it was some sort of wholesaler or something, but I was wrong. They even have quite a selection of wines to taste, and they'll give you a modest discount if you sign up for a Wine Depot membership card.

You can check out The Wine Depot's website here.

Anyway, I've started to stop by the shop and take home what I hope will be an interesting selection of wines -- one bottle each (all reds) from a variety of countries and terroirs. It's fun, and I've found some excellent bargains this way.

So, the other night, on Halloween, the adults had a few treats, as well.

We opened and drained: 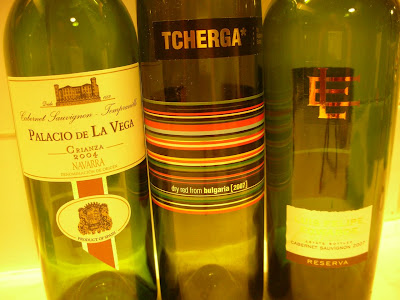 My good friends Momchil and Tanya brought the Bulgarian, direct from Sofia, while my good friends Stewart and Kathleen contributed the Frontera.

The other four wines, which I bought myself at The Wine Depot, were all under $10 a bottle.

We had a great time tasting and comparing. 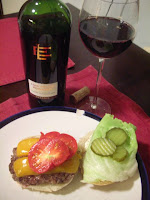 From what I remember (things got a little hazy toward the end there), I think the overall conclusion was that we liked the Luis Felipe Edwards the best. That confirmed my own conclusion. I had recently pronounced it my new favorite wine after pairing it superbly with a homemade cheddar cheeseburger with homegrown tomatoes a few weeks ago (right). I was blown away by this beefy varietal, considering its price ($10).

We also really liked the Farnese Sangiovese, which is, perhaps, my newest most favorite wine, considering its price (around $7 a bottle). It's not quite the man that the Luis Felipe Edwards is, but it's smooth and medium-bodied and went really well with the takeout pizzas we were eating.

I hope we can do this sort of tasting again.

Next time, I'll make it a blind tasting, and throw in some drinkable $5 bottles I've found around Prague and see what comes out on top.
Posted by Grant Podelco at 8:56 PM 3 comments: