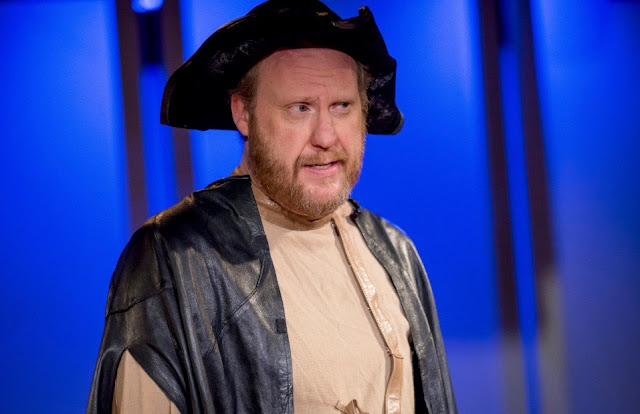 As the Sea Captain. (Photo courtesy of Kaja Curtis)

Boldness be my friend! Arm me, audacity. -- William Shakespeare, "Cymbeline"

In 2014, I think it was, for one of my New Year's resolutions, I vowed to do something that made me uncomfortable, that I was scared of doing, that frightened me, that took me out of my comfort zone.

I succeeded in accomplishing that resolution, but it took me until the spring of 2015 to do it. And what did I do, exactly? Well, I acted before a live audience in a Shakespeare play, and to say that I was scared is to belabor understatement.

I've done a few scary things in my life, or things that seemed scary to me at the time, at least. I wrote my own jokes and went on stage at a comedy club in Syracuse, New York, in the late 1980s; I went bungee jumping in the early 1990s; and I reported from Afghanistan for four weeks in 2002. So it had been awhile since I'd challenged myself in that way.

Daisy and I have become good friends over the past few years with Guy Roberts and Jessica Boone of the Prague Shakespeare Company. Guy is artistic director of PSC and Jessica is co-CEO. They're both incredibly talented Shakespearean actors, and Guy has directed many of the Shakespeare works performed at the historic Kolowrat Theatre in Prague.

Every time Daisy and I would go to a PSC production, I'd always think to myself, "Man, I would love to do something like that." Just a small part, mind you. Just to feel what it's like to act on the stage, to feel the adrenalin rush of coming out from behind the curtain as someone else, to interact with other actors in a situation where there's no Take 2, where it's all live, baby.

I was bold enough to mention my dream to Guy a few years ago. He didn't laugh or dismiss the idea immediately, as I figured he might. I have done some acting in a few TV shows that have been filmed in Prague, as well as in a number of student films for the Prague Film School, so my idea wasn't totally crazy, but I'd never done live theater. It just seemed too damn scary. 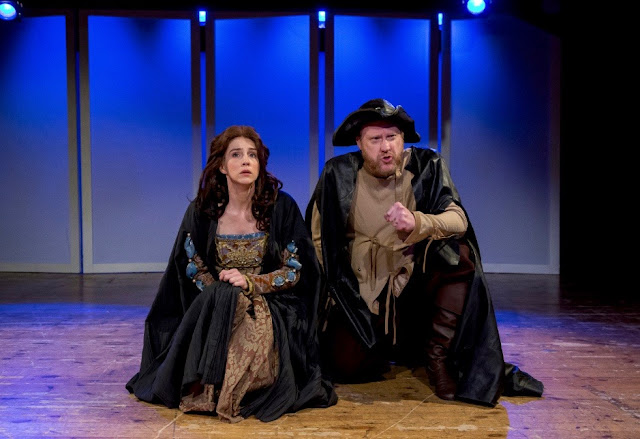 With Jessica Boone as Viola. (Photo courtesy of Kaja Curtis)

I was secretly hoping that Guy might make something happen someday, but I was also secretly dreading it. What if he did offer me something? Could I act before a live audience? Could I memorize my lines? I'm bad at memorizing things. I suck at foreign languages.

In the end, Guy did ask me to audition, for Hamlet, back in 2012, but I declined, writing back:


"There is a part of me that is truly desperate to try something like this. And part of me thinks I'd succeed somehow. (Hubris!) Of course, I have no stage experience, so starting with Shakespeare is probably a huge mistake anyway. But I don't have any Shakespeare scenes or monologues from my past that I could audition with, and I wouldn't know where to start, frankly. Seems like the Gravedigger would best suit me, but I am confident that you will find someone slightly more experienced than I!"


I thought nothing more of my dream. I'd turned down the one offer I was ever likely to get.


"Hi, Grant. I hope this finds you well… How are you? We just had an actor drop out of Twelfth Night and now we have two small roles that we need to fill and thought it would be really cool to get you involved if at all possible..

We would like to offer you the role of The Sea Captain and the Priest. The production will be directed by Rebecca Greene Udden, the Artistic Director of Main Street Theater Company in Houston, Texas.

I know this is a bit out of left field but I have seen you act in film clips and you are a good actor and I would love to get you involved with the show if possible.

So let me know what you think and if you have any questions - thanks so much for the consideration. 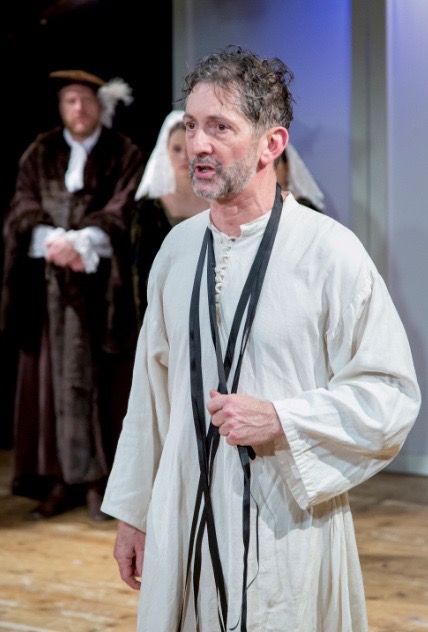 As The Priest, with the amazing Gregory Gudgeon as Malvolio. (Photo courtesy of Kaja Curtis)

It had happened. I felt like throwing up. Shakespeare? Me? What had I gotten myself into, for Chrissakes? I can’t memorize Shakespeare!

I kept the offer to myself for a day or so and then mentioned it to Daisy.

I felt sick to my stomach. I had Guy e-mail me the script. I looked at my parts. They were both small, but bigger than I had ever imagined. But Daisy was right. I could not say no. Or rather, I could not not say yes. I screwed my courage to the sticking place and told Guy I was in. 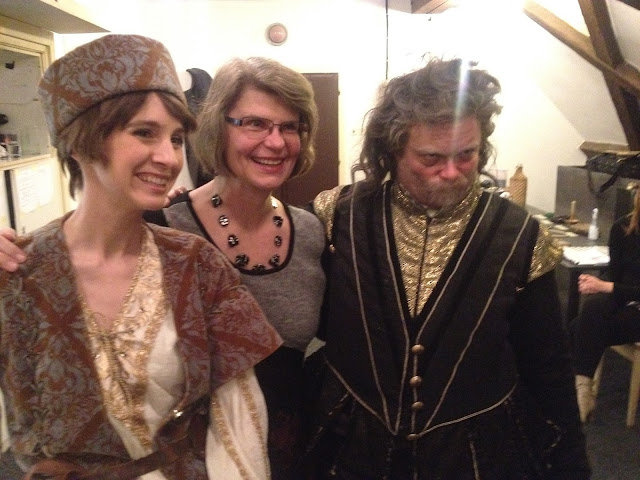 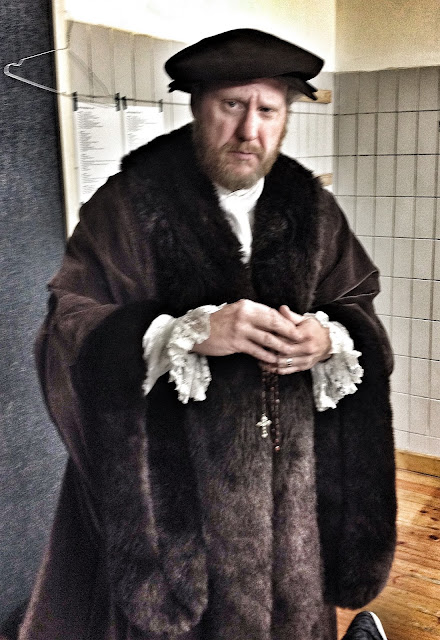 Backstage as The Priest.

And for the next six weeks, I lived and breathed those parts. I dreamed them. I carried my script with me everywhere I went, mumbling my lines to myself over and over as I walked to the metro, while I rode the metro or tram, in my car, in the shower.

And you know what? Slowly, very slowly, and much to my surprise, I did learn them. For example, as the Sea Captain, part of my lines went like this:


True, madam: and, to comfort you with chance,
Assure yourself, after our ship did split,
When you and those poor number saved with you
Hung on our driving boat, I saw your brother,
Most provident in peril, bind himself,
To a strong mast that lived upon the sea;
Where, like Arion on the dolphin's back,
I saw him hold acquaintance with the waves
So long as I could see.

We spent many weeks in rehearsals. I loved every minute of it. I loved seeing how such a big production all came together. I loved being backstage and being made to feel like a real member of the company by the real members of the company. I loved getting fitted for my Sea Captain and Priest costumes. In the end, after a bit of difficulty early on, I even loved dancing in the choreographed number that ended the play. And it was such an honor to be working side by side with Rebecca and Guy and even having scenes with both Jessica as Viola and Jan Thompson O.B.E., the British ambassador to the Czech Republic, as Olivia. 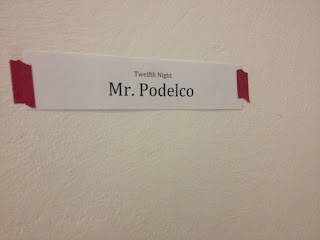 And when opening night came and the theater filled with people and it was my time to take the stage, my body was electrified. I was nervous, but it was a different kind of nervous. I wanted to walk on that stage. I couldn't wait, in fact. It was almost like this was where I was supposed to be.

I think I did eight performances of Twelfth Night. Yes, I stepped on Jessica's lines at least once, and as The Priest, I must admit that a moment came onstage where I simply forgot what I was supposed to say. I froze. Believe me, I'll never forget that moment. Sheer, abject terror. I looked at Jan and I looked at the other performers onstage (at that point in the play, there are a lot of people onstage), and I looked at the audience, and nothing came out of my mouth. I had rehearsed those lines probably 1,000 times, but when I needed them, they weren't there.

Just the sounds of crickets.

And then, eventually, after what seemed like five minutes of awkward silence but was probably only five seconds, a few stumbling words came out of my mouth, and then somehow my brain slid back into gear and I picked back up from where I was supposed to be. I was mortified, but was assured that it happens to the best of them.

In the end, the play was a big hit. And I had accomplished something I thought was impossible.

Fast forward to the end of August, and I get another e-mail:

John Poston is adapting and directing a new play for our Artistic Lab series based on Karel Capek's Pocket Stories and we would like to have a gathering of all the cast we hope to be in the show to meet and go over the script.

If you are getting this email it means we would love for you to be in the show.

Please come to Divadlo Kolowrat on 8 September at 7pm and find out more...

Let me know if you can or cannot make it.


And so my second foray into live theater – The Order of the Blue Chrysanthemum (OBC) -- began. I entered into it with as much – or more -- trepidation than I did Twelfth Night, because my part – that of Interior Minister Martin Bartosek – is HUGE. At least compared with Twelfth Night. Many, many lines.

But when the final script came in, I had a month or so to prepare, and I did it. I learned my lines. I did something that I didn't think I could do. And we played to three sold-out houses. And if that wasn't enough, Emma, my step-daughter, who wants to be a professional actress and has been in many, many plays at the International School of Prague and at Prague Youth Theatre, is also in OBC. She has a speaking part as a maid, marking her first professional acting gig. How cool is that?! 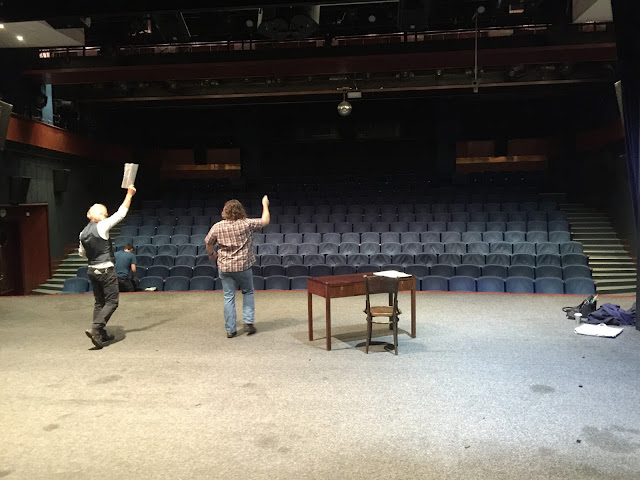 Rehearsing OBC with director John Poston (right) and Curtis Matthew, not in the Kolowrat Theatre but, just for a few days, in the lovely Divadlo Bez zábradlí. 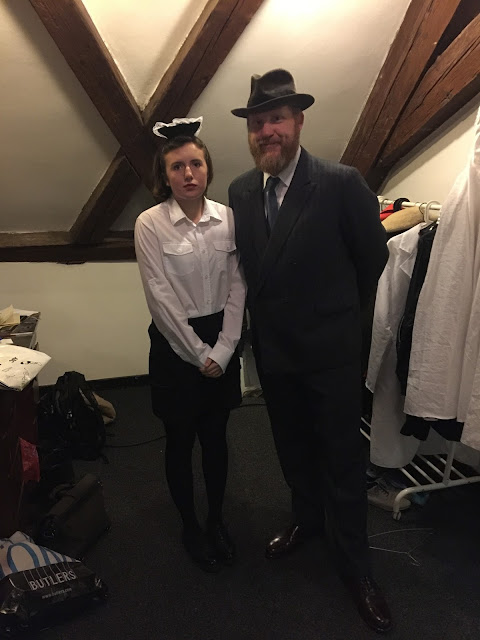 Backstage at the Kolowrat with Emma. 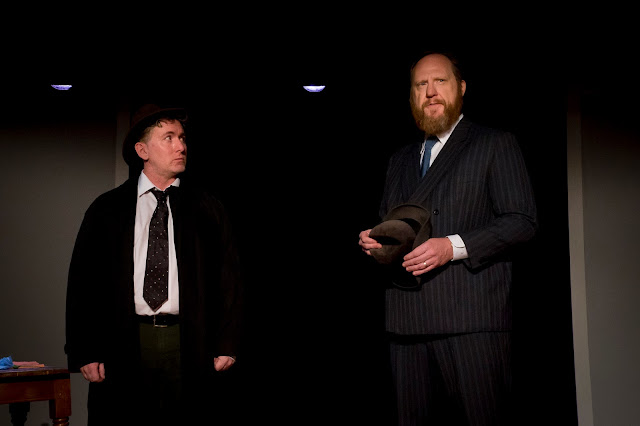 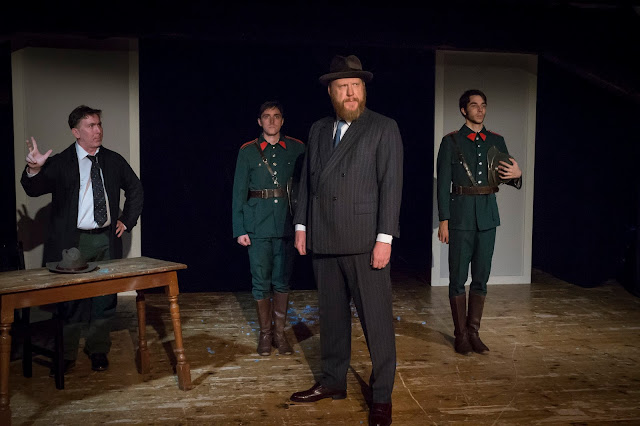 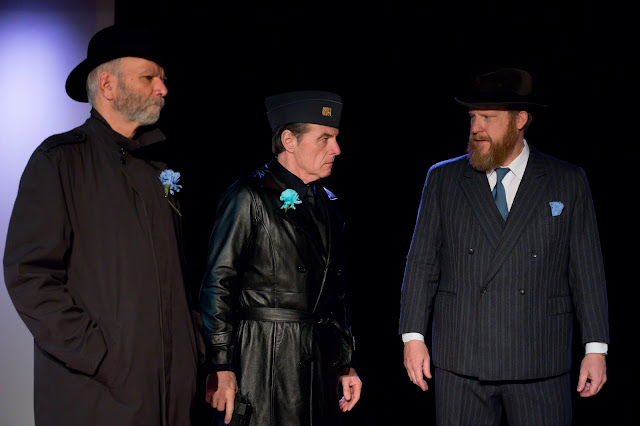 If you want to see The Order of the Blue Chrysanthemum, we're doing it again this week. It plays January 29-30 at 7 p.m. at the Kolowrat Theatre in Prague, near Mustek. You can find ticket information here. It's a fun night out at the theater. There's comedy, there's drama, and a few surprises. You won't be bored. And the Kolowrat is a wonderfully intimate venue in which to experience theater.

If all of this weren't enough, I learned that at the PSC holiday party in December (which I was unable to attend), I shared the award for Best Newcomer with fellow Twelfth Night and OBC actor Sam Barlien! Wow.

Thanks to Guy, Jessica, Rebecca, OBC director John Poston, Stage Manager Kris Ayers, and everyone in both casts, both in front of and behind the curtain, for making me feel not only so welcome but that I was capable of doing this and not embarrassing myself or the Prague Shakespeare Company. Bravo to them!

I will never forget it.
Posted by Grant Podelco at 4:48 PM 1 comment: