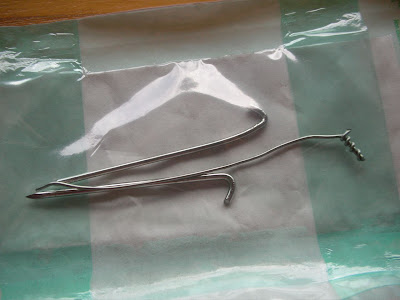 The wires in question.

On Friday, July 10, I spent the day in Prague's Motol hospital to have the stabilizing wires removed from the reconstructed AC joint in my left shoulder. You'll recall that I had reconstructive surgery on my shoulder at the end of May.

I thought it was going to be pretty routine, but my most recent visit ended up being one of the most sickening experiences of my life.

I was given three shots of local anesthesia in my shoulder while in my hospital room.

Then, I was wheeled into an operating theater in Motol just like my first surgery. 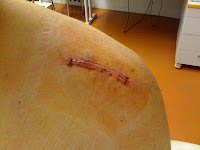 Then the surgeon basically reopened my old entrance wound to gain access to the wires.

At first, it didn't feel so bad. Pretty routine. I couldn't really feel anything. And my shoulder was blocked from my view, thankfully, by a large surgical blanket.

But then the pulling and tugging began.

It felt like the surgeon was trying to pull my entire skeleton through a keyhole using a pair of pliers.

It was more the feeling of what was happening rather than any searing pain.

I got very dizzy and almost passed out while he wrestled the wires out of my shoulder. I was breathing pretty hard. The whole thing took about 30 minutes or so -- a very long 30 minutes. 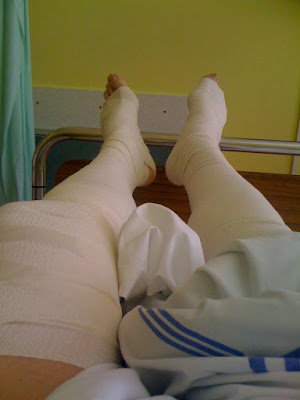 Both times I've been at Motol hospital for shoulder surgery, a nurse has come in and wrapped both of my legs in bandages just before going under the knife. I asked my surgeon why, and he laughed and said he didn't really know. Someone else told me it is to prevent thrombosis. I looked it up and it said "compression stockings" are often used. The bandages they put on me were wrapped pretty loosely, as you can see. Weird.

I related this story to a good friend of mine in the United States, who had shoulder surgery himself a few years back, and he was incredulous that I hadn't been given some sort of drugs to distract me while the removal of the wires occurred:

"Jesus, Grant, The doctors over there practice medicine as if it were the Middle Ages. Did they bleed you to get the bad humors out? I can understand not putting you under. Anesthesiologists have to be prepared to breathe for you if something goes hinky. But you should have been so loaded up with opiates that you'd have been cracking knock-knock jokes while they pulled out the wires. There's just no excuse for this."

Not Bad For A Doctor's Office 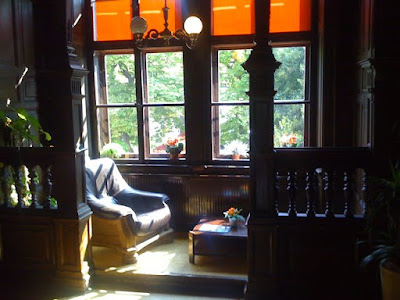 As waiting rooms go, you could do worse.

I've been spending a lot of time lately at the Canadian Medical Center in Prague. Mostly for physical therapy on my shoulder. (I had surgery to reconstruct my AC joint at the end of May.)

Anyway, the CMC is housed in a beautiful old chateau on the edge of Prague.

As I was sitting there waiting for a doctor the other day, I took a few photos of some interesting inside views.

I guess I should have taken one of the outside of the chateau, but I'm stupid. 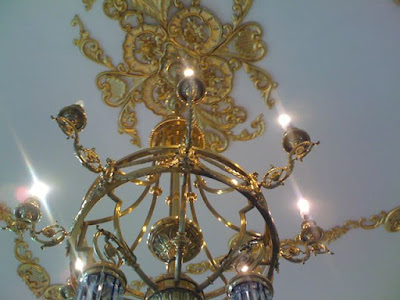 A chandelier in the waiting room. 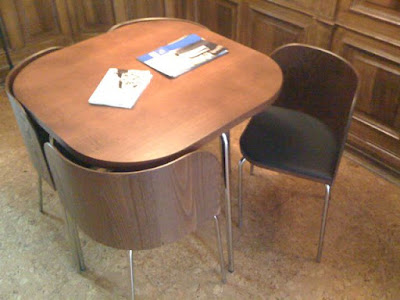 I love architecture and design. I really admire the design of this table and four chairs. So simple. So clean and functional. I guess it must date from the 1950s or '60s. I'd love to know more, if anyone else is more informed about this style than I am.
Posted by Grant Podelco at 10:48 AM 1 comment: