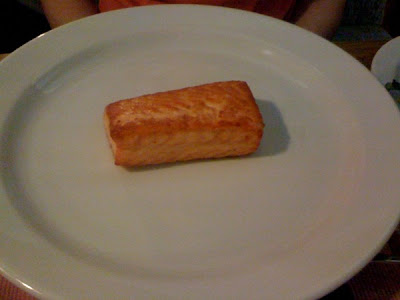 Czech cuisine has never been celebrated, but this guy's not even trying.

Daisy and I were out to dinner the other night in the downstairs pub at Hotel Beranek, in the village of Nebušice, northwest of Prague. Daisy ordered salmon, with side dishes of buttered spinach and rice.

The picture above is of the salmon, presented naked on a humongous white plate. No little side salad. No pesto drizzled in an abstract pattern. No ornamental tomato.

The rice and spinach came on their own (smaller) white plates.

The salmon was OK, but it's hard to screw up salmon.

I've reviewed restaurants professionally, and eaten good meals and bad all around the world, and I think I can safely say that this is the worst presentation I've ever seen. 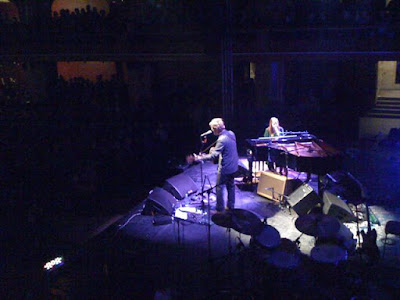 Market and Glen performed by themselves, and were later joined by members of Glen's band, The Frames.

You know their music from the film "Once." One of the songs from that movie, "Falling Slowly," won the Oscar for Best Original Song at the 2007 Academy Awards.

They are Markéta Irglová of the Czech Republic and Glen Hansard of Ireland, and they call themselves The Swell Season (named after a novel by the Czech author Josef Škvorecký). Both of them also starred in "Once." (If you haven't yet seen the film, you must. It's fantastic.)

The Swell Season have a wonderful new album out called "Strict Joy," and they played the first concert of their European tour at Prague's sumptuous Art Nouveau masterpiece, the Great Hall at Lucerna, on February 1. Daisy and I went to see them.

It ranks, at least for me, as one of the best concerts I've ever seen.

We had seats on an ornate balcony right above the stage. The sound was a little muted, but we were so close to the performers that that was a small price to pay.

Marketa was facing us as she was singing and playing the piano, so we got to observe some of the subtle facial expressions she traded with Glen during some of the songs, especially during what I believe was Glen's unexpected (at least to Marketa) segue from "Falling Slowly" to "With or Without You" by U2. (See a video of that moment from the show below.)

As everyone in the audience knew, the two broke up last year after an extended love affair, so it was quite charming to hear Glen singing, "I can't live, with or without you," and looking right at Marketa. One of those little concert moments that I'll probably remember for quite some time.

It was a Springsteen-length affair -- more than two and a half hours. I thought it went on a little long, to be honest, but Glen is such a charismatic performer (a "force of nature," one of my colleagues called him), and it was the first date of their tour, and the crowd was so worshipful, that you could forgive Glen and Marketa for their enthusiasm. 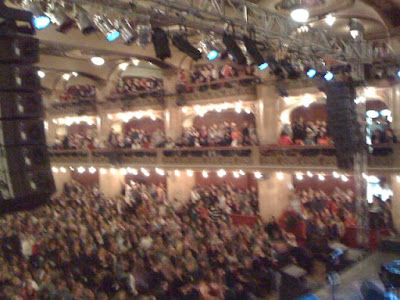 The Great Hall at Lucerna was packed to the rafters.

I love this video for the first single of their new album.
Posted by Grant Podelco at 11:52 AM No comments: 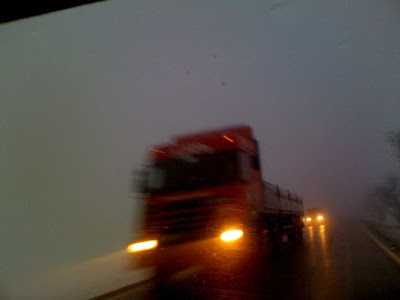 Yet another story of an insane Czech driver.

I was driving into work the other day from my home in Černý Vůl, outside of Prague, on Route 241, heading toward Suchdol. The roads were icy and still covered in snow in places. There were three or four cars ahead of me on the highway. The road is twisty and narrow. It is all a no-passing zone.

Suddenly, a van passed me at high speed on a very dangerous stretch of the road. A car was oncoming in the other lane. The van narrowly managed to get around me and back into my lane ahead of me before hitting the other car head-on.

He could have killed himself, the driver of the other car, as well as involved my family in the ensuing crash.

As I often do in these situations, I honked my horn hard and long, in a feeble attempt to tell the driver, "You are driving like a #*&@#! maniac." Maybe, just maybe, he'll think twice about driving that way the next time.

In this case, though, the guy was driving a van with a business website printed on the back. I got to work, looked up the website, and sent a nasty e-mail, complaining about one of their drivers. I also included the number plate.

Here's the response I received (translated roughly from Czech into English):

I am the idiot of whom you write. I apologize if I somehow endangered you, but I had good reason to be in a hurry. Do not worry about my work..

Have a nice day and many happy miles.

The Czech Republic has one of Europe's worst driving records. More pedestrians are killed by drivers in the Czech Republic than any other European nation. I see accidents every day driving the short distance into Prague. I see incredible displays of bad driving on every trip I take. As a cyclist, I take my life into my own hands when I ride on the roads.

The Czech, normally such a placid people, turn into raving lunatics behind the wheel. When will it stop?
Posted by Grant Podelco at 9:26 AM 4 comments: 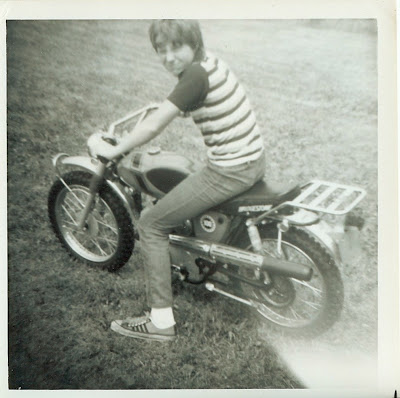 I was pawing through some old photographs and came across what I believe is the only existing photograph of me and my Bridgestone 100 motorcycle. (It may actually be the only photograph of this particular model of motorcycle. It was obscure then and seems to remain so.)

I was thrilled to have a motorcycle (I wanted to be a professional motocross rider when I was 15 or so), but less than enthusiastic, as I remember, that it was a Bridgestone. I had yearned for a Yamaha or a Kawasaki or a Honda. I'd never heard of Bridgestone.

It was also some sort of street/dirt bike hybrid. It had knobby tires, but not really a dirt bike suspension. But that didn't stop me from riding it around the 15 acres or so of fields we owned in New Alexandria, Pennsylvania, outside Pittsburgh.

I can't really remember what happened to that bike. I don't think it ran very well. As I remember, it sat in the garage, out of service, for quite some time.

But I was thrilled to have received it, and smiled when I came across this photo.

And now, more than 30 years later, I finally have a Honda. 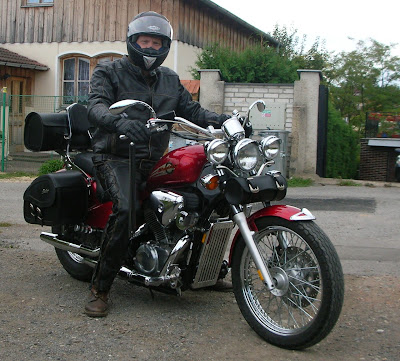