The Swiss Fox, The Big Shoe, And The Famous Tall Mountain 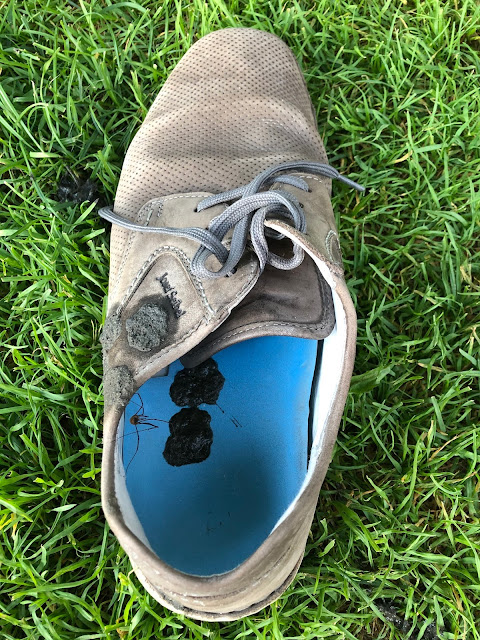 Once upon a time, there was a playful fox who lived near a campground in a magical Swiss village. The fox loved to steal people's shoes. The fox stole so many shoes from careless campers that the owner of the campground even put up a warning sign. 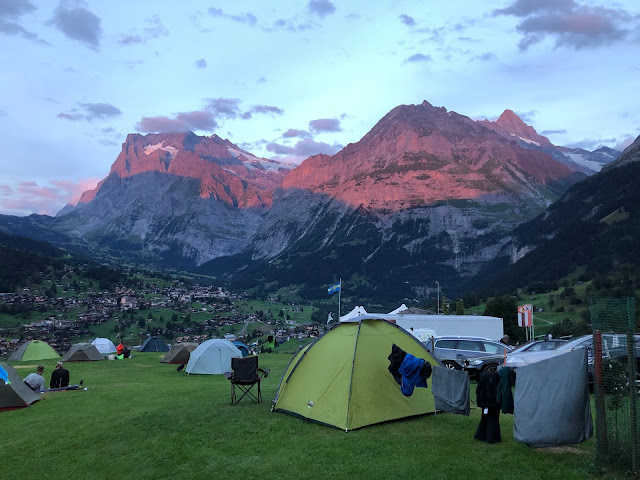 One night, a silly man who forgot about the sign or perhaps had had too much wine left his only pair of shoes under a table outside his rented RV. When the silly man got up in the morning, he discovered that one of his shoes was missing. And that his remaining shoe had been shit in and upon by what looked like a very sick fox. 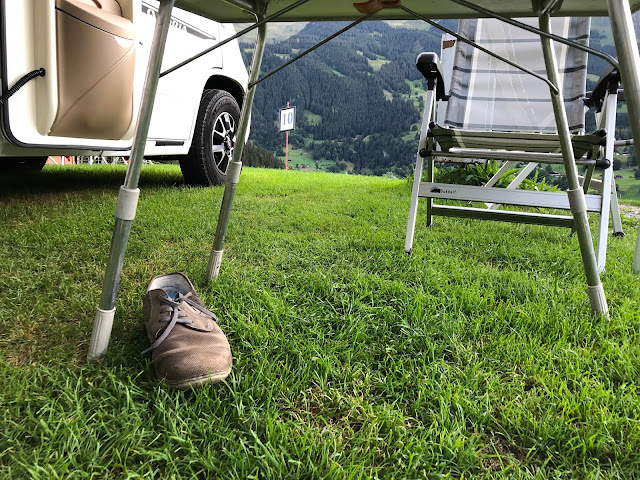 The silly man walked barefoot all through the surrounding farmer's fields of cold, dewy grass, being careful not to step in the scattered mounds of manure, as he searched for his shoe. His feet were cold and wet. The silly man found three other single shoes in the long grass, the footwear of other careless campers, which at first gave him hope. But his hope quickly vanished. His shoe was nowhere to be seen.
But he did meet a nice cat. 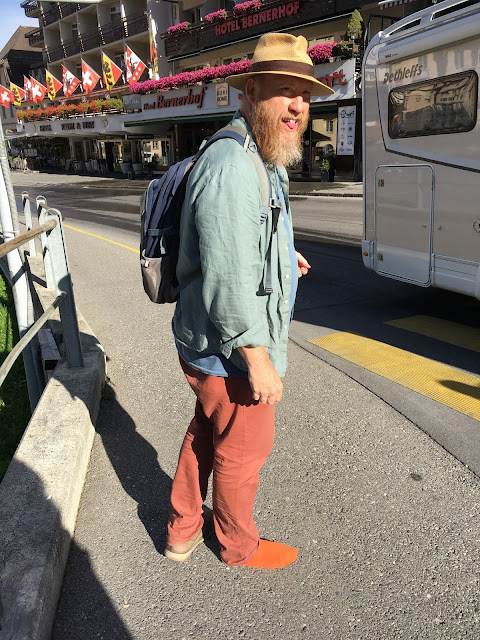 What was the silly man to do?
He had big feet and found it hard to buy new shoes, even at home, which was more than 700 kilometers away. He knew that he had no choice: He must take the bus down into the tiny village below and try to find a pair of size 51 shoes (or 15.5 U.S.).
His wife kindly cleaned off the silly man's one shoe, and he put a sock on the other foot, and put on his face mask, and took the bus into the village with his family and his dog. He was hoping that no one was staring at his one shoeless foot, but he knew that they were. 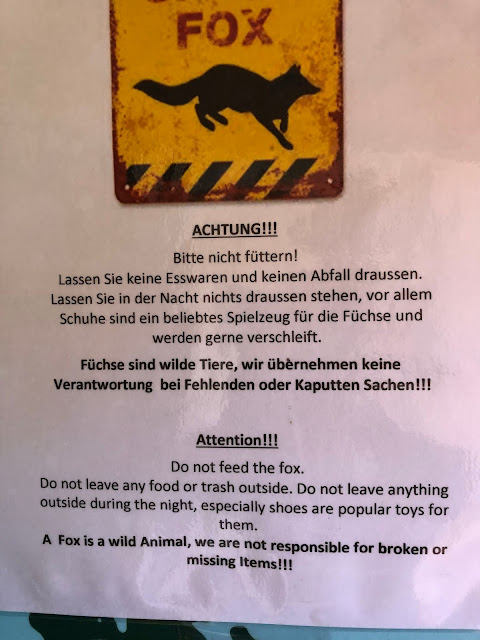 He went into many stores, whose friendly shopkeepers were amused by his story. But they only laughed heartily when he told them the size of shoe he needed. One very nice shopkeeper worked really hard to find some sandals that the silly man could wear.
Finally, they found one pair that kinda, sorta fit, and the silly man bought those for 30 CHF, because he had no choice. He really wanted to go to the top of the famous tall mountain the next day and knew that he needed something on his feet because there was still snow up there, even though it was August. 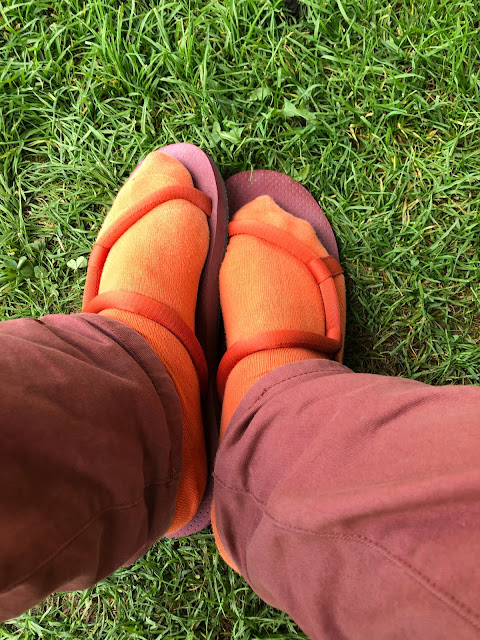 The last shop in the village told the silly man that they could order a pair in his size from a nearby city, but that it would take 24 hours to arrive. So the silly man said yes. He didn't want to wear ill-fitting sandals for the rest of his trip. 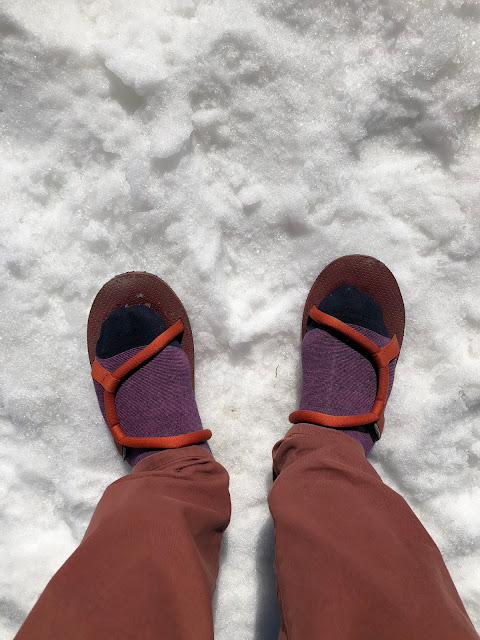 The silly man did go to the top of the famous tall mountain and walk in the snow in his silly sandals, and later that day, when he came down from the mountain, the nice shopkeeper who ordered him some shoes sold him a new pair of size 51s for 200 CHF.
And that's how a silly man lost a giant shoe to a crafty fox, who is probably living inside it now. With his whole family. 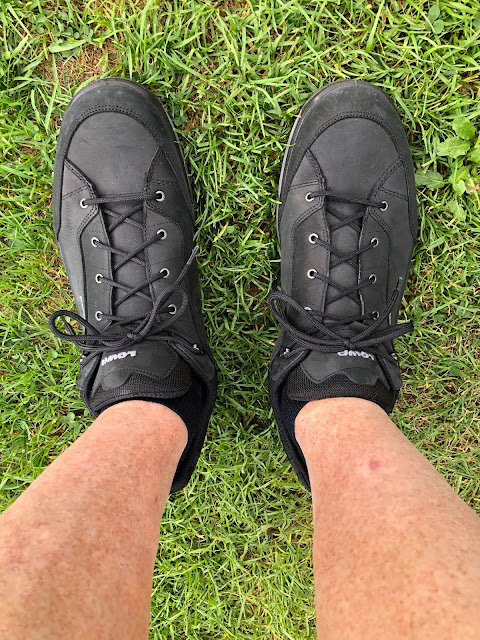 Posted by Grant Podelco at 2:05 PM No comments: