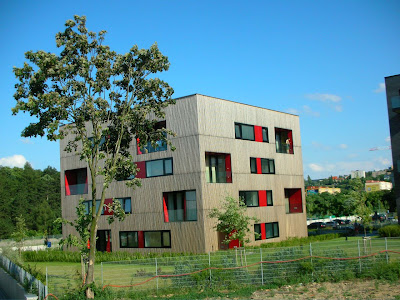 I've always been interested in architecture. I really enjoy being in a building (the Tate Modern in London, for example) or a house (Frank Lloyd Wright's Fallingwater comes to mind) that makes you feel something.

I enjoy being in a building and letting the building have its way with me, to let it influence how I'm thinking and what I'm thinking.

I might not like them in the end, but I admire buildings that elicit a reaction of any kind. 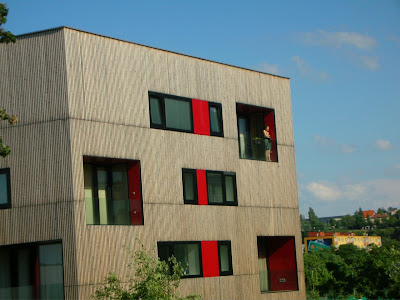 So many of the buildings and houses built today are so, well, boring. There's no imagination, no effort to instill the structure with a soul or personality. Does it really cost that much more to add a little whimsy to a building, or a detail that is pleasing to the eye?

I live in Prague, so I'm never far from some amazing architecture -- 1,000 years of architecture. In Prague, we have everything from the 14th-century Charles Bridge, to Frank Gehry's so-called Dancing Building, to the Art Nouveau masterwork Obecni Dum, or Municipal House, one of my all-time favorite buildings in the world. 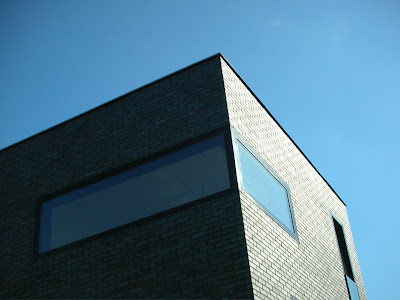 Lately, I've been interested in apartment buildings in Prague. I've noticed that a few the apartment complexes being built around the city have a certain style that I admire. They're not cookie-cutter buildings.

A few months ago, I took some pictures of what I believe are two separate apartment or housing complexes off Evropska, toward Divoka Sarka, that I admire. I think they're cool. They've got clean lines and splashes of color and I really admire them.

I'm not quite sure what style of architecture these buildings would fit into. Post-Modern? Functionalist?

Take a look above and below: 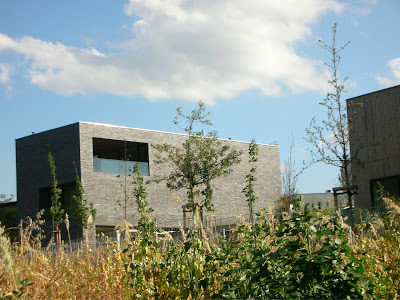 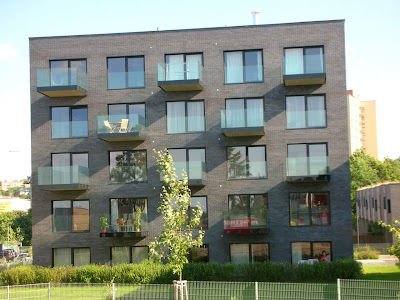 On the flip side, I discovered a couple of houses in a new neighborhood in the village of Roztoky that seem to take the same general idea and totally botch it up. They can only be described as black cubes.

I use to think that they were not quite finished, but now I'm convinced that this is the way they're supposed to look. Why someone would design such an ugly house I do not know. I wonder what it's like to live in them.

Is there a method to the madness? 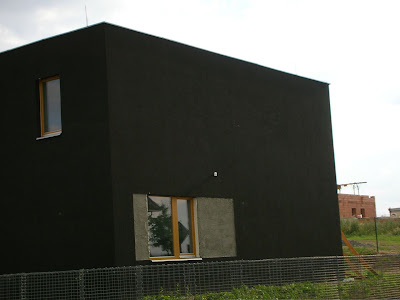 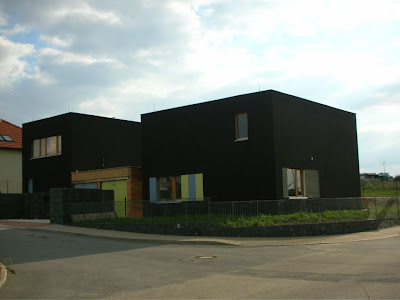 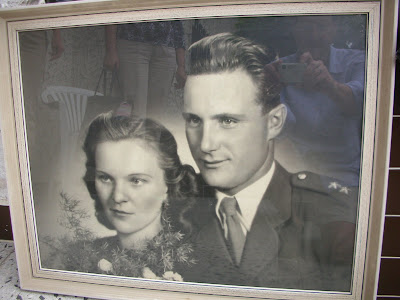 An amazing photograph of Petr Hlavaty and Jirina taken sometime in the mid-1940s.

I want to tell you about a man I know who defines the word "gusto."

His name is Petr Hlavaty, and he's my next-door neighbor here in Černý Vůl, the little village I live in, west of Prague.

Mr. Hlavaty doesn't speak any English, and I don't speak any Czech, save for a few pitiful words and phrases, so we've never had a chance to talk, which is a damn shame. Because I've admired Mr. Hlavaty from a distance ever since Daisy and I moved here in September 2007.

Mr. Hlavaty is 84 years old, but he looks -- and more importantly acts -- at least 20 years younger. He's got a wonderful vegetable and flower garden surrounding his house, and I've never seen a man work as hard at it as he does, all year long. 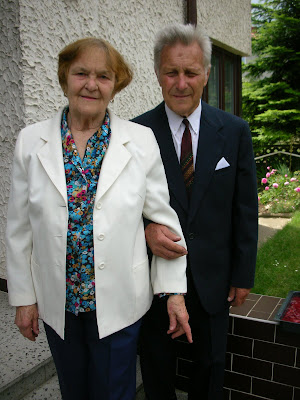 He is always outside -- digging or mowing or planting or weeding or pruning or laying paving stones. His energy is breathtaking. If I'm not mistaken, he also built the large house we both are living in -- he on one side, Daisy and I and Emma on the other. His son-in-law, Svatoslav Gosman, told me he dug the massive cellar himself, by himself. 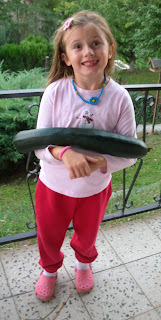 And the results of his labor are something else. He's been kind enough to share some of his bounty with us over the past year -- a massive zucchini last year (that's Emma holding the monster at right), and earlier this year a huge basket of what were the sweetest strawberries I've ever tasted, along with a delicious strawberry cake baked by his wife, Jiřina, herself a marvel at age 83.

The couple recently celebrated their 60th wedding anniversary. They were married in September 1948 in Podivin, in south Moravia. They met while Mr. Hlavaty was serving in the Czechoslovak Army. He retired as a colonel. She worked as the assistant to the general manager of the Czechoslovak State Archive until her retirement.

I had the pleasure of being able to congratulate them as they were leaving for an anniversary party at Mr. Hlavaty's son's house in the country near Křivoklát, and I got to see a wonderful framed photo of the two taken in the mid-1940s, shortly before their marriage.

They haven't changed a bit.

All the best to you both.
Posted by Grant Podelco at 9:31 PM 2 comments: