Beyond The Basics, Human Anatomy Lab Offers A Bigger Lesson 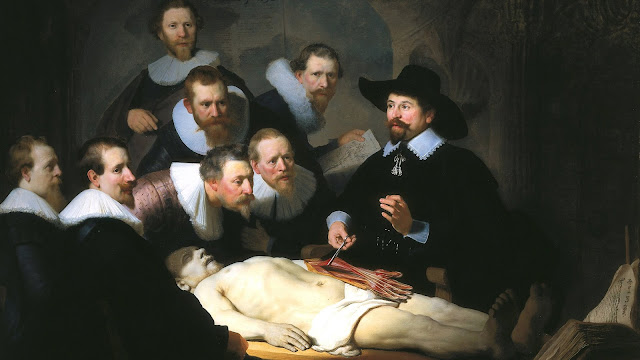 The Anatomy Lesson Of Dr. Tulp (1632) by Rembrandt

This essay was published in The Eugene (Oregon) Register-Guard on July 8, 2001. I worked as the features editor for The R-G, after I left Prague in November 1999, before returning, as so many of us do, in August 2001. I think about this experience often and thought I'd share this here on Gusto.

A FEW WEEKS AGO, my wife and I stopped at the Farmers' Market to buy red potatoes, radishes, and baby zucchini for a dinner we were preparing for guests later that day. Then we headed over to the University of Oregon to touch dead people.

My wife is going to school at the Cascade Institute of Massage & Body Therapies in Eugene to become a licensed massage therapist. It's an intense, yearlong program and involves the study of everything from anatomy and cell structures to ethics and pathology.

It's one thing to be learning muscles from textbooks, peeling back clear plastic pages to reveal layers of tissue and muscle and bone, or to probe for the gastrocnemius muscle under the warm, giving flesh of a fellow student.

It's something else entirely to wrap your fingers around the thick ropes of muscle exposed on the calf of a male cadaver and follow them down from knee to ankle.

When Deana first told me part of her studies would involve multiple visits to a cadaver lab, I asked if I could go along. When would I ever have such a chance to peer inside the human body? Morbid curiosity got the better of me.

That's how I ended up in Room B75 of the UO's Human Anatomy Teaching Laboratory, surrounded by five moist corpses, each wrapped in cloth and plastic, resting in various states of dissection on stainless steel gurneys. There were 21 of us in that cramped, low-ceilinged room, including 13 students, an instructor and a UO graduate student.

Large charts detailing the inner workings of the human spine and digestive system decorated the walls. A human skeleton hung listlessly in a corner, next to some life-sized mannequins upholstered in exposed muscle, standing near a bin labeled: Used Gloves and Other Dissecting Waste.

We had been warned about the smell, told to bring a change of clothes, that we wouldn't be able to get the odor out of them.

As our group waited anxiously in a basement hallway of the Onyx Bridge building before entering the laboratory, one student spoke for many when she said, "I'm kinda terrified, actually."

"As long as there's no juice stuff coming out, I'll be OK," another said.

Cascade's pathology instructor, Dr. Marie Freyre, gave us a little pep talk before we went in.

"The preciousness of life is a wonderful thing," she said. "That's what you're going to be experiencing today."

Then she mentioned the smell again. "It's going to be intense.

It's uncommon anymore to come face-to-face with death. Even funerals are antiseptic affairs, the bodies on view well-dressed, their hair combed, cheeks rouged. Seems to me this wasn't always the case, that seeing a dead body probably wasn't that unusual 100 years ago. Before antibiotics and penicillin, it was much more common to wake up one morning and find that a family member hadn't.

There was no rouge on the cheeks of the bodies in Room B75. Some of the bodies didn't even have cheeks. They were naked. Their identities, exact ages and causes of death were unknown.

One male cadaver was resting face down, his nose pressed against the cold metal table. He sported a round metal tag looped through his ear that was stamped with the number 302225. Small plastic buckets hung beneath drain holes on the gurneys, each filled with a cup or so of reddish liquid. A sign dangling from one of the gurneys read: "This Is Gerty" - a playful nickname, something to take the edge off.

They'd all been dead for six months or more. The smell of the preservatives was sharp, intensely medicinal, but more tolerable than I had imagined.

Tesa Brown, 24, a UO master's student in sports medicine, had already been working on a few of the cadavers and introduced us to them, unwrapping them from their shrouds, revealing their grim, pinched faces and opened torsos overflowing with organs.

We inched closer to the bodies, hesitant, keeping a respectful distance from death. Freyre detected our shyness.

"It's an experience to open the cadaver and view the human form. That's why we're here," she said. "This is your first lab, so walk around and really get in there."

In the end, we really did get in there, unfurling Slinky-like lengths of intestine, poking the subcutaneous fat exposed on an abdomen, following veins and arteries, limp as shoestrings, down an arm with our fingers, turning loose pages of skin and muscle to reveal the next anatomical chapters hidden beneath.

"Everybody take a look at this one," Freyre said, standing next to an old woman's body, her muscles a dark brown, like beef jerky. "The organs are really beautiful."

It was oddly moving for me to reach inside this woman's chest and cradle her heart -- stiff, heavy, the color of red wine -- in the palm of my hand.

I'll remember how it felt for the rest of my life, how for such a small, old woman, it was such a presence in her tiny chest.

Morbid curiosity had given way to profound respect. I wondered about the lives these bodies -- these people -- had led, the children they had borne, the places they had traveled, the homes where they'd lived, the birthdays they'd celebrated.

I wondered about those they had loved and those who had loved them in return.

I find myself thinking about them often now, and not only for what their sacrifice taught me about the inner workings of the human body, which was considerable. Yes, it's a cliche, but confronting their death has made me appreciate anew the fragility of life.

Seeing inside them has helped me to see inside myself.
Posted by Grant Podelco at 9:48 AM 3 comments: