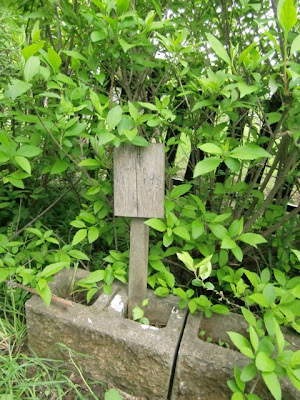 We've buried two cats in our backyard over the past couple of years -- Oscar Junior, a stray cat we'd grown mightily fond of, and our beloved Zhenya. (Read more about them here and here.)

Over the weekend, I discovered that there's at least one more family pet at eternal rest in our garden.

While doing some yard work, I noticed a small wooden sign stuck in the middle of a cinder block. I'd seen the sign before but had never noticed its faded writing. I think I must have assumed it was some sort of garden marker and hadn't paid it much attention.

On closer inspection, I discovered that the sign reads:

It doesn't take Sherlock Holmes to deduce that the dearly departed was likely a hamster or a gerbil and that Richards was the family name of our house's previous occupant.

What a fantastic name for a hamster.

Rest in peace, little guy.
Posted by Grant Podelco at 7:17 AM