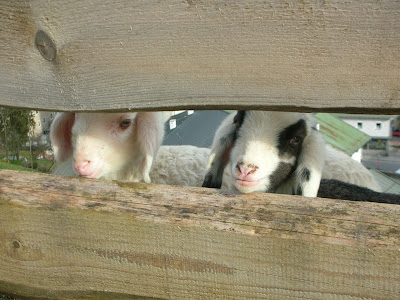 These lambs wobbled their way to the fence long enough for us to give them a quick scratch.

Call them family traditions in the making.

This summer, Daisy, Emma and I plan to once again spend a lazy two weeks on the pristine beaches of Brela, a tiny village on Croatia's Adriatic coast, about an hour or so south of Split.

And we've all just returned from spending Easter in Bavaria, in southern Germany -- the second year in a row we've done that. And I'd bet anything we'll do it again next year.

Last year, we spent two or three nights in Garmisch-Partenkirchen, at the base of Germany's highest mountain, the Zugspitze. We took a train and cable car to the peak, and also hiked through the dramatic gorge known as the Partnachklamm. We drank liters of weißbier, ate meters of sausages, and -- after a refreshing climb -- gulped freshly made buttermilk at the top of the Eckbauer. 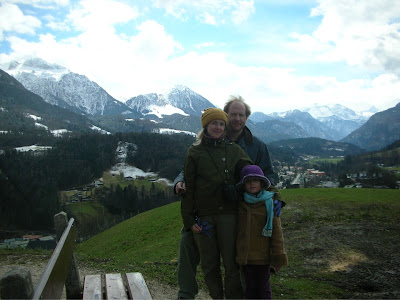 A family portrait with Berchtesgaden behind us.

In fact, we've been to Garmisch three times now in the past two years. Daisy and I went once in 2006, we were there for Easter with Emma and Daisy's mother, Robin, in 2007, and I showed my sister, Carol, and my nephew, Alex, around the place when they visited Germany last summer.

This year, we decided once again to spend Easter in Bavaria, but to visit a different village. We chose Berchtesgaden, further east, almost in Austria -- about 20 kilometers or so from Salzburg.

I'd visited there before back in the early '90s with a friend. We even played a round at a golf course there which was tied in some way to the U.S. military. High above the course loomed Hitler's "Eagle's Nest." 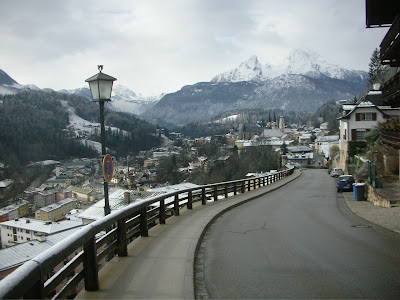 The drive from the hotel into the village of Berchtesgaden includes this panorama.

Berchtesgaden is famous for its stunning alpine scenery, and the beauty of these sweeping panaromas was not lost on the members of the Third Reich. The Eagle's Nest was built as a mountaintop retreat for Hitler's 50th birthday. Today, it's a simple cafe, albeit one with a stunning pedigree and views to match. But there's something quite delicious in the irony, of an evil man's playground now serving coffee and sandwiches for tourist families.

Or perhaps it's actually kind of disturbing. Like Stalin's sauna being turned into a winebar or something.

From Prague, Berchtesgaden was a 530-kilometer drive, which took us about five hours in the pouring rain.

We love Garmisch. I think Berchtesgaden gives it a run for its money, though.

We booked a room online at the delightful, family-run Alpenhotel Weiherbach. Berchtesgaden's old town is only a few kilometers from the hotel by car, or a short, mildly strenuous hike over a little mountain called Lockstein. 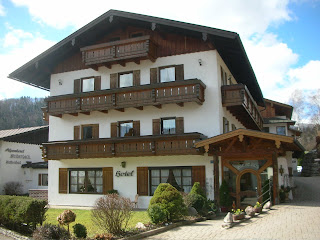 We were quite pleased with the hotel. A little hard to find at first (we had to ask for directions at the information kiosk in town), but in a wonderful location, in the mountains above the village, with easy access to hiking.

The cost for the three of us, taxes and breakfast included, was 111 euros per night, or around $175.

I'd stay there again in a heartbeat.

My only quibbles? The pool was quite chilly for my taste, and you had to pay extra to use the sauna or the whirlpool (4 and 5 euros, respectively).

We had one of our most memorable German dining experiences at Gasthaus Bier-Adam at Marktplatz 22. We had such a good time the first night that we went back for dinner the next two evenings, as well. Why mess with a good thing?

We ate suckling pig and roasted pig's knuckle and a farmer's feast of sausages, pork and bacon and sauerkraut, homemade spatzle with cheese, white asparagus, and about 34 tall glasses of cloudy, lemony weißbier. 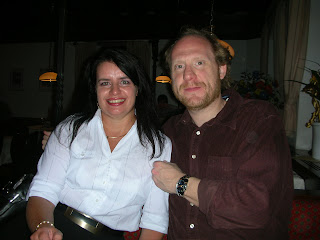 The food was great, and the atmosphere upstairs where we at was cozy and warm. It was particularly memorable due to our waitress, Suzy (that's her at right), whom I consider one of the Greatest Waitresses Of All Time. Bubbly. Attentive. Knowledgeable. Perfect English. She really looked after us, remembering what we liked to eat and drink on successive nights.

I told her I thought she was a fantastic waitress.

"That's what happens when you love your job as much as I do," she said, before hustling off to tend to the other tables.

(As an added plus, I don't think the restaurant allows smoking either.) 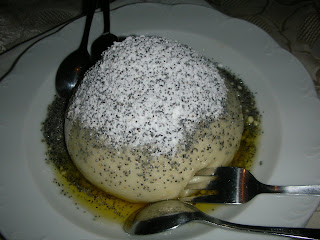 We also discovered what Daisy confidently declared as being her favorite dessert of all time -- germknödel. Germknödel is a yeast dumpling the size of a small pillow that's filled with plum jam and then steamed. It's then served swimming in melted butter and smothered under a blizzard of sugar and poppy seeds.

I think I may have to agree with Daisy on this one.

I had it in Garmisch last summer, too, but it was served in a vanilla sauce. I prefer the melted butter, frankly, but they were both good.

We ate lunch one day at Gasthof Goldener Bär at Weihnachtsschützenplatz 4. I'd recommend this place, too, although it's not as cozy as Bier-Adam. They did have some nice outdoor seating, however, which would have been lovely on a warmer day.

Dinner each night came to around 60 euros for the three of us ($95), give or take a few euros, including drinks and dessert.

We had two full days in Berchtesgaden. On the first full day, Daisy and Emma spent the morning swimming while I drove to the nearby village of Konigsee, to a petrol station and garage recommended by the hotel. Not exactly how I wanted to be spending my first day in Berchtesgaden.

It seems the engine light on our 2001 Mazda 626 popped on for seemingly no reason the previous night (causing me no end of worry, considering our long drive back). In fact, the mechanic could find nothing wrong, although he did manage to get the light to go off. 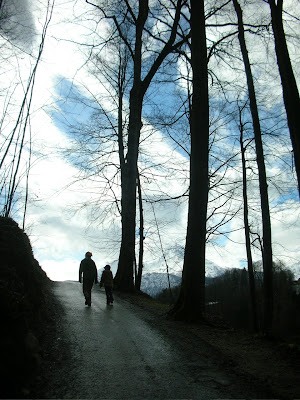 Daisy and Emma head toward the summit of Lockstein.

That afternoon, we hiked from the hotel to the village, over the top of the mini-mountain of Lockstein, which has a pleasant cafe on top (closed when we were there) and, it turns out, two holiday flats, which look very nice, based on their website and which are quite reasonably priced. The views from the rooms must be amazing. 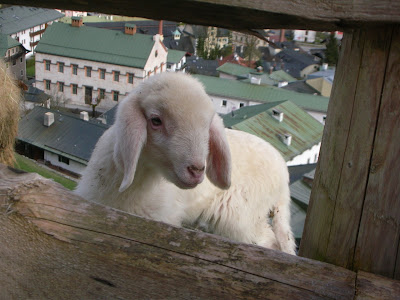 During our hike, we had a memorable encounter with a small flock of sheep grazing on a steep hillside and five or six wobbly lambs, so cute you just wanted to weep.

Emma also discovered a cute cat at the Cafe Lockstein which she named Monet, for some reason. (She put the accent on the first syllable,) 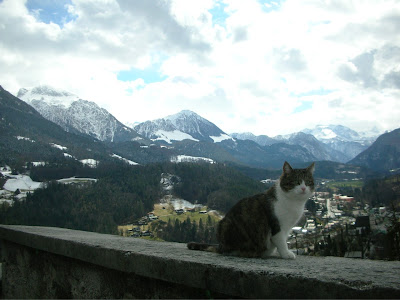 "Monet" the cat strikes a pose above the village of Berchtesgaden.

On the second full day, Easter Sunday, after spending the morning at the pool again, we drove to Konigsee, famous not for its car repair but for its pristine alpine lake -- some 8 kilometers long and 190 meters deep. It's emerald-green water is said to be the cleanest in Germany. It's surrounded by steep mountains on almost every side, and is basically only accessible from the village.

Boat tours operate regularly (29 euros for the family, if I remember correctly, or about $46 -- pretty pricey, actually). 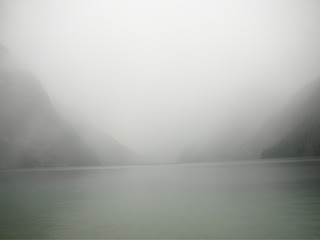 The weather didn't cooperate (it was overcast and cloudy and snowing quite profusely), so we were robbed of some of the sweeping views visitors normally enjoy, but it was still gorgeous.

An electric boat takes about 35 or 40 minutes or so to make its way -- very slowly -- to the chapel of St. Bartholomew, which sits at the end of a peninsula jutting into the lake. It's a heavily touristed spot, but admittedly quite lovely. I imagine the lake must be overrun by visitors in the summer months.

There's an old hunting lodge there where you can grab a decent meal (Emma, a confirmed meat-eater, keeps boasting about the deer she ate there -- venison goulash). Next door is the Fischerstueberl, a small wooden lodge where they sell only one thing -- smoked trout. Freshly caught in the lake that morning, it's said.

I bought a trout for around 3 euros ($4.75) and took it back to the hotel, where we enjoyed it on brown bread, washed down with a couple of glasses of Enzian, the local schnapps made from the root of the Enzian flower. 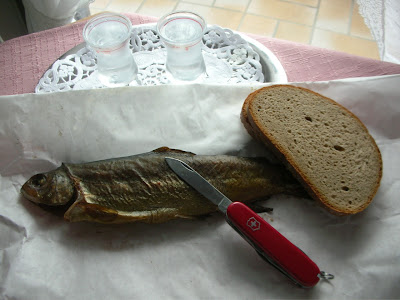 Smoked trout from the Konigsee, with a couple of glasses of Enzian schnapps.

During the boat ride, a tour guide pointed out various sights along the way, and made jokes that everyone laughed at but us. The commentary was all in German. We even shut off the engine for a few minutes in the middle of the lake to hear the famous Konigsee echo. The tour guide opened the hatch, told us all to slide our windows open, whereupon he pulled out a trumpet, aimed it at the highlands, and proceeding to a play a few figures.

Sure enough, the echoes were clear and sharp. Impressive. 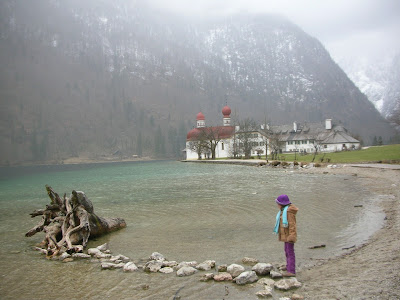 Emma and the chapel of St. Bartholomew on Konigsee.

Next time, we'll hope for better weather, and perhaps take the boat a bit further down the lake to Salet, where you can hook up with a spectacular mountain trail that takes you past a 400-meter waterfall to another lake, the Obersee.

One quick note: They say the boats operating on the lake are electric, to avoid polluting the pristine waters, but quite a few times during our trip, thick blue oil smoke belched out of the engine of our boat and polluted the air inside our small cabin. There's something fishy here, methinks!

We awoke on our last day, March 24, to find the landscape blanketed in deep, puffy snow. I'd stupidly removed the winter tires from our car a few weeks before, but fortunately the roads were mostly just wet.

I hope we go back to Berchtesgaden. We'll visit the Eagle's Nest and do more hiking around Konigsee. There's also a famous salt mine in the village that looks like it'd be fun, especially for kids.

And we'll head back to the Bier-Adam and hope that Suzy is still there.

I'm sure she'll remember us.

Click on pictures for caption information.
Posted by Grant Podelco at 3:09 PM