The Original Giant Leap For Mankind 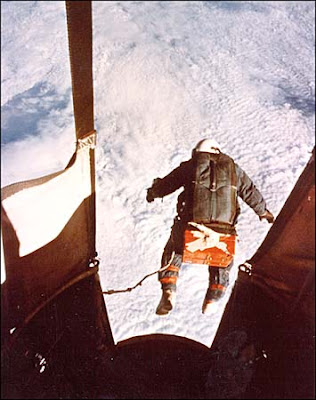 Kittinger's autobiography, published in 1961, was aptly titled "The Long, Lonely Leap." Sadly, it's out of print.

I have watched the video of Joseph Kittinger's famous skydive hundreds of times, and each and every time, I get cold chills.

In my opinion, Kittinger is one of the bravest men in history. And perhaps the most unsung hero of the Space Age. Everyone knows the names of Glenn and Gagarin, Armstrong and Aldrin. Ask even space nuts about Kittinger and you're liable to meet with blank stares.

I believe Kittinger, a test pilot, should be credited for being the first man in space. In August 1960, at the height of the space race, he ascended in a helium balloon to almost 103,000 feet (31,300 meters). It's certainly the edge of space, if not space itself. But let's not quibble about mere numbers here.

Footage taken from the balloon shows the curve of the Earth below the open gondola, and inky blackness everywhere else. He's in space, for all intents and purposes.

What he did next defies belief.

Encased in a pressurized suit, he free-fell for 4 minutes and 36 seconds before opening his parachute at 18,000 feet (5,500 meters). He was testing the possibility of bailing out of spacecraft at high altitudes.

It's said that Kittinger, during his free-fall, became the only human ever to have broken the speed of sound without the aid of a rocket car or airplane or other piece of machinery.

He only had gravity to help him.

I always wonder what went through his mind just before he took that step off the gondola. What is your brain saying to you in that situation?

And Kittinger's record, by the way, still stands, for both highest jump and longest free-fall -- 48 years later.

Check out this music video by the group Boards of Canada for their song "Dayvan Cowboy." The video incorporates incredible archival footage of Kittinger's jump, which later turns into more fantastical imagery later in the song.

I dare anyone to watch it and not be moved:

There are lots of other videos about Kittinger on YouTube, many of which detail the two previous high-altitude jumps he made before his historic leap in 1960.

Not content to rest on his laurels, Kittinger flew almost 500 combat missions in Vietnam and spent 11 months as a prisoner of war in the infamous Hanoi Hilton.

He retired from the Air Force and went on to become the first person to cross the Atlantic Ocean solo in a balloon in 1984, among other accomplishments. He was inducted into the National Aviation Hall of Fame in 1997.

Kittinger is still alive and living in the southern United States. Seems like he's got a few chapters to add to his autobiography.

My dream is to interview him for a story.

The ironic thing is that I just can't seem to conjure up the courage to give him a call.
Posted by Grant Podelco at 2:30 PM